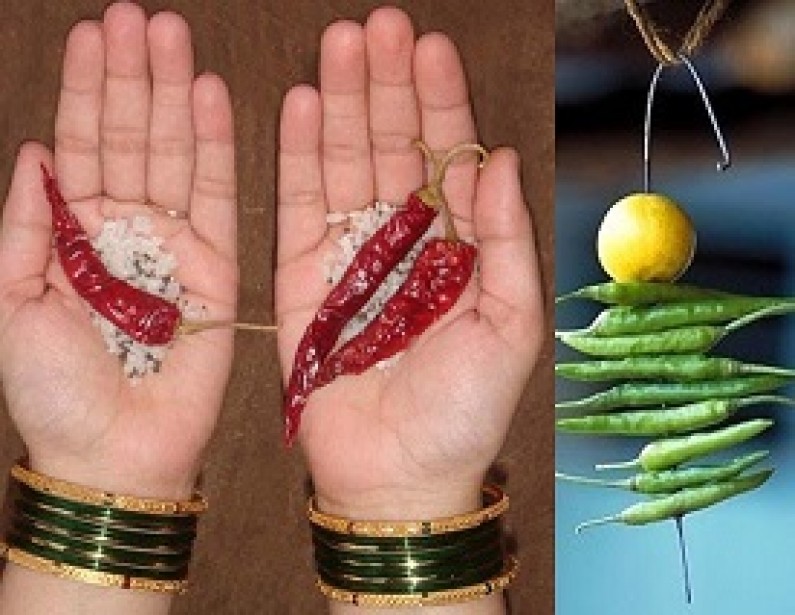 Nazar is a very traditional concept. It is like someone who not a well wisher is trying to create damage. Literally speaking the word nazar means eye. The story goes like this that there is a Deity known as Lord Shani. It was said that whenever he would visit any place the place would destroy. This is exactly why he never left his home. Everyone would be scared of him. People thought that if his eyes fall on a person he or she will fall sick. Similarly if his eyes fall on a palace it will destroy eventually. He once visited mount Kailash to see Lord Shiva. His eyes fell on the model of the palace that Ravana was making for Lord Shiva. The palace did come up but Lord Shiva was not able to live in there. Shani tell told Shiva that he is very upset that people don’t like him. He does not have any company. He is tired of his life. Lord Shiva tells Shani that he does have a purpose. His purpose is to ensure that people don’t become materialistic. This is why whenever his eyes fall on something that is material it destroys. Shani was pleased to hear this and he left. Even today in India people belive that if they have a good house or a good car and someone who is not a well wisher sees it. The Nazar of that person can affect the house or the car. It can also happen with human beings. This is exactly why people ensure that they get rid of Nazar. We will now discuss more about what Nazar is and how to get rid of it.

We hope that you have got some idea on Nazar. To explain it more I will quote a story from personal life. I had a sister she was very cute. One day my neighbour visited us and she said that my baby sister was very cute. She said this for some five to six times. The very next day my sister fell sick. My mother told me that day that she feared it was the Nazar of my neighbour. As I grew up I always kept this story in mind and ensured that I get rid of all the Nazar that I attract. This incident made me belive that there is definitely a concept of Nazar.

When it comes to children the best way to avoid Nazar is to put a kajal dot on their head. You can also tie a black thread to their feet or hand. These ensure that no bad Nazar can harm them. Similarly if you have an item in the house that is precious you can place a black kajal dot in that too. You can try this and you will soon realise that it does make a difference.

Use of Red Chillies

This may sound weird but it is definitely true. You too can try this remedy in your house.  This is called Nazar utarna. You can also use camphor burn it and move it around the person affected. The movement should be three times clock wise and three times anti clockwise. Then take the smoke from the flame and place it to the forehead of the person. He or she should not see the flame again. This will help them get rid of the bad Nazar.

You can also use pumpkin to get rid of bad Nazar. The pumpkin is placed in front of a new house to ensure that it can protect the property from bad Nazar. There are some dolls and faces that you can get in the market. These are mostly used to get rid of the bad Nazar that can come towards the house. These dolls are more common in the south. They look like demons.

These are some of the methods that are used to get rid of Nazar. We hope that you have by now understood what Nazar is and how to get rid of it. They are stories that grandmothers would tell us. We feel that as these traditions have survived so many years there must be some reality to it. This is exactly why we feel that is definitely there and by doing these small things it can be avoided.