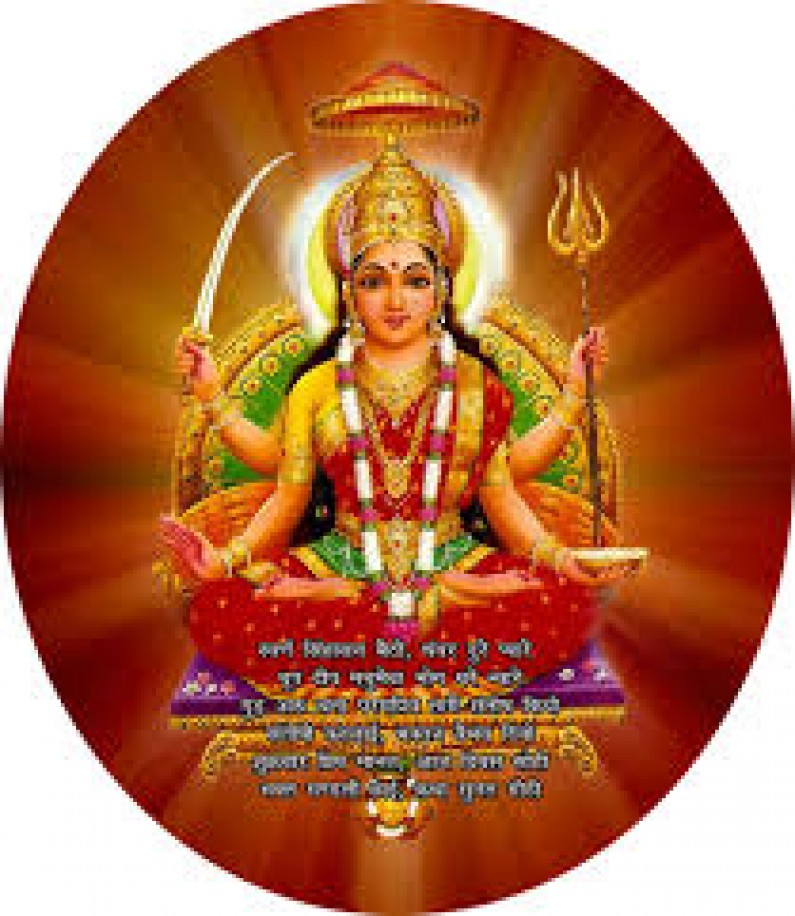 In our previous article we have discussed about how the birth of Santoshi Maa is associated with the famous festival of Raksha Bandhan. In this article we are going to discuss about the significance of Santoshi Maa and how she still remains as one of the most prominent Indian goddesses.

Santoshi Maa is known as Devi all across the county. He carries a sword and a golden pot of rice. She also holds a Trishul. Santoshi Maa had a few temples dedicated to her in different parts of the country. She was mentioned in the mythology as the daughter of Lord Ganesh. She was born because the two sons of Ganesh named Labh and Subh who wanted a sister to celebrate Rakhi. The popularity of Santoshi Maa started to increase once a movie was released in 1975 about the legend of the goddess. This made the goddess popular in modern India and more and more women started to worship this goddess so that all their wishes were full filled. Even today Santoshi Maa is a popular topic for television series and many serials on TV are based on the legend of Santoshi Maa.

Santoshi Maa’s vrata means that on 16 consecutive Fridays the women who are worshipping her must fast and eat only one meal a day. This meal must be had after the puja is done and in the evening. During the day the devotee can have water and some light fruits. No sour and bitter food must be taken by the devotee during the day. She must do a puja in the evening. Offer a bowl of rice, incense, bowl of raw sugar and roasted chick peas to the goddess to please her. After the 16 Fridays are done the devotee must do the audyapan ceremony. In this ceremony the devotee thanks the goddess and decides not to do the vrata anymore. On this day the devotee must offer festive food to eight boys and some gifts as per the ability of the devotee. The devotee must ensure that the boys do not consume anything sour or bitter during the day else the ceremony will fail.

The vrata katha is a must that the devotee must recite to please the goddess on each Friday. The Vrata katha basically tells about the power of the goddess and how she must be worshipped. The story tells about how the vrata of goddess Santoshi Maa became popular. There was an old woman who had seven sons. Of all the sons the youngest one was the most irresponsible one. The old woman gave the leftover food of the other sons to the youngest son. The wife of the youngest son got to know about this and she did not like this. She told her husband what was going on. The youngest son got very upset and he left the house. He went and joined the business of a wealthy merchant and worked very hard. With hard work and dedication he became rich. The wife of the youngest son was with the inlaws. She was tortured by them and was in a very sad state. Her husband was busy in his life and completely forgot about her. The wife heard about the 16 vratas of the goddess and performed it with full dedication. Santoshi Maa was pleased by the devotion of the wife and she appeared in the dream of the husband. She told the husband that his wife is in a very sad condition and needs his help.

The wife decided that she will do the vrata again and also the audyapan ceremony. She successfully completed it and at the end of it the husband was released. Not only had that she also bore a son. The goddess decided to test the devotion of the wife so she appeared in a terrified form. All the other family members were scared of her and ran away from her but her devotee could recognise that the terrifying looking woman was none other than the Santoshi Maa herself. She worshipped the goddess and thanked her for all the help. The in laws came back and heard what happened. They asked for forgiveness from the youngest son and his wife. They also decided to start worshipping the goddess. Some experts believe that this story is nothing but a folk lore that has been passed from one generation to the other. The experts say that there is no mention of the names of the characters that make it even more difficult to believe that this is a true story. The katha also has no mention about the origin of Santoshi Maa and that she is the daughter of Lord Ganesh. Many also have a feeling that Santoshi Maa is basically an extension of Lord Ganesh and makes him popular as a deity.

Some say that a more popular story that is associated with Santoshi Maa is the story of her devotee Satyavati. Some believe that this story to be true. It was depicted in many movies but it is not a part of the vrata katha that we discussed in the beginning of this article. Satyavati heard about Santoshi Maa and prayed to her. Satyavati wanted to marry a man called Birju. Santoshi Maa fulfilled the sish of her devotee. After the marriage Satyavati decides to visit all the temples of Santoshi Maa with her husband. Narad wants to play a mischief so he goes to the wives of the trinity namely Parvati (wife of Shiva), Lakshmi (wife of Vishnu) and Brahmani (wife of Brahma). He tells these three goddesses that a new goddess with the name of Santoshi Maa is becoming popular on Earth. Parvati is the mother of Lord Ganesh and the grand mother of Santoshi Maa.

The three goddesses got jealous and they wanted to reduce the poularity of Santoshi Maa. They decided to play a trick when Birju went out for some work to a far off land the three goddesses started to spread the word that he was dead and Satyavati was made to live the life of a widow. Satyavati keeps doing the Friday poojas of Santoshi Maa. Santoshi Maa appears in the dream of Birju and reminds him of his wife Satyavati. Birju immediately decides to get back to his wife. He comes back as a rich man and takes his wife out of the tortures that her sister in laws were doing to her. The couple start to live happily and Satyavati decides to do the udayan ceremony. On this day she invites the eight sons of her sister in laws to eat at her place. The siter in laws is jealouse and they mix bitter and sour ingredients to the food that is being offered to the kids. Santoshi Maa gets very angry and she kills the eight boys and cripples their mothers. Satyavati is blamed for all this that has happened and she is in a very bad state. Satyavati prays to Santoshi Maa. The goddess appears and on pleadings made by Satyavati she decides to bring back the boys to life and make their mothers all right. The three goddesses Laksmi, Parvati and Brahmani finally decide that they made a mistake and should not have been so harsh on Satyavati. They decide they will let Santoshi Maa become popular among the women. They also bless Santoshi Maa so that she becomes more popular.

The matra for Santoshi Maa is “Om shri santoshi mahamaye gajanandam dayini shukravar priye Devi narayani namostute”. It is good to say this mantra on Friday thinking about Santoshi Maa . There are many temples of Santoshi Maa across the country. Santoshi Maa is considered to be a very powerful goddess and many women across India worship her. The idols of Santoshi Maa are not kept in a house because if that is done a lot of rules have to be followed. There are many temples of Santoshi Maa across the country where the devotees can go and offer prayers to the goddess. The vrata for Santoshi Maa must be done only for 16 Fridays because doing it more than that is not possible as lot of restrictions have to be followed. If a slight mistake happens during the vrata or the udayana ceremony the consequences can be really bad for all. It is believed that Santoshi Maa can full fill all the wishes of her devotees but if the devotee does not perform the vrata well the goddess can get really upset.