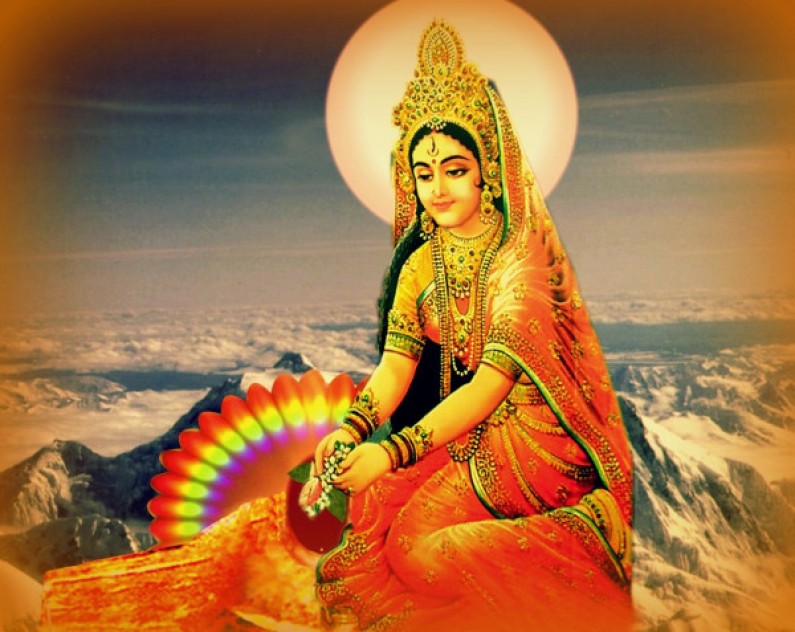 Parvati was the wife of Lord Shiva. She was Sati in her previous birth. As Sati she did get married to Shiva but as her father was against this marriage she was finally forced to set herself on fire and die. Lord Shiva could not bear the loss of Sati and was in a furious mood for a long time. He finally calmed down after a lot of efforts by all the other gods. Parvati was the rebirth of Sati and she always wanted to marry Lord Shiva. Her parents prepared her for the fact that getting Lord Shiva as husband is not easy and she would have to do a lot of tapasya. Parvati did a deep meditation for years and finally managed to get Lord Shiva as her husband. Everyone was for this union and specially the devtas.

The asuras had become very powerful and they drove away the devtas from heaven. Only the son of Lord Shiva and goddess Parvati could kill the asuras and get heaven back to the devtas. They all waited for the marriage to happen so that the child could be born at the earliest.

Lord Shiva and Parvati are enjoying a happy married life and there is no news about a son for a long time. This makes the devtas scared and they go to Vishnu. They request Vishnu to go to Lord Shiva and tell him about the need for a son to save the world from the asuras. Lord Vishnu meets up Lord Shiva and tells him that the devtas are desperate to hear about the birth of his son. The demons have raised havoc all across the three lokas.

The Disclosure of a Curse

Lord Shiva is reminded of his duty to have a son so he talks about it to Parvati. Goddess Parvati now is in a dilemma and confesses that she was cursed by Rati and so she cannot carry a child in her womb. Rati was the wife of Kamdeva. Kamdeva was sent by the gods to Lord Shiva to ensure that he gets out of his meditative state and get attracted to Parvati.

Lord Shiva was very angry as he was disturbed during his meditation so he burnt down Kamdeva. Rati held Parvati responsible for the death of her husband and cursed her. Lord Shiva thinks for a while and then he says that there is a way out with the help of yoga. Lord Shiva and Parvati go to the Amaranth cave and they sit in meditation. The aim of this was to simply create a son.

The devtas start to guard the Amaranth caves to ensure that no demons can enter it and stop Lord Shiva and goddess Parvati as they sit in meditation.

Lord Shiva and Goddess Parvati created Kartik by simply meditating. Goddess Parvati did not carry Lord Kartik in her womb so can we say that Lord Kartik was only the son of Shiva and not Parvati? Well this is not true if that was the case Lord Shiva could have created Kartik all on his own why he had to get married. He was anyways against the idea of marriage to Parvati. He was rather forced to get married by the gods. Lord Shiva was prakruti or nature to create he needed the help of Shakti that is why he got married to Parvati and created Lord Kartik. Definitely he was a part of both Lord Shiva and Parvati and not the other way round.

Even Lord Gnash was the son of Parvati he too was not born from her womb. One day Parvati was taking bath and she used the powder that she was using to wash her body to create an idol. She later spelled life into this idol and it was her son Ganesh. Lord Kartik and Lord Ganesh did show traits of sibling rivalry which we will discuss in other articles.

Although she did not give birth to the two boys she was extremely attached to them and could go to any level to protect them like a normal mother. When Lord Kartik was about to take birth the demons were very anxious and they wanted to ensure that the child is never born. They came to destroy the fireball that had Kartik inside it.

The lord of fire (Agni Deva) lifted the ball and he ran with it to protect the baby from the demons. When Parvati got to know that her son was taken away by Agni Deva she got furious and she started to curse all the gods. She also cursed the River Ganga. She was in a very bad mood and was not ready to understand anything. Lord Shiva finally calmed her down and she was in a deep state of sorrow in those years when she had to stay away from her child Kartik.

After Ganesha was born there was a similar incident. Lord Shiva was not there in Kailash when Ganesha was born. Devi Parvati went to take a shower and she told Ganesha not to allow anyone come into the chamber where she was taking bath. Ganesha stopped Lord Shiva from entering. Lord Shiva got extremely angry and he removed the head of Ganesha from his body. When goddess Parvati saw that her son was dead she went out of control in anger and started to destroy the universe. The gods got scared and they requested Lord Shiva to get Ganesha back to life and Lord Shiva was forced to do so.

A Divine yet Normal Mother

Goddess Parvati was like a normal mother who could not take the pain of staying away from her kids and she was always there to protect her kids from all dangers. This also signifies a very important fact that for a mother it is not important to give birth. She can also feel the same motherly affection for kids who are not born from her womb. This is the specialty and strength of a woman.