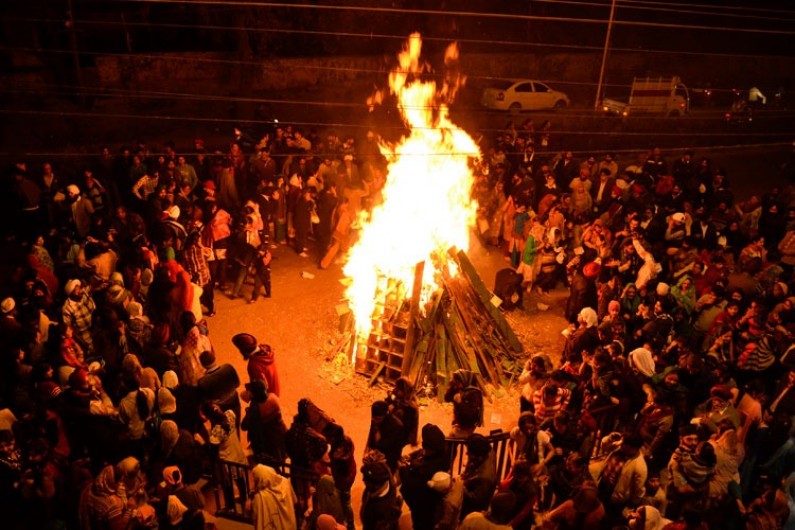 Lohri is a very famous festival of North India specifically the state of Punjab. Lohri is celebrated as per the Bikrami calendar, and usually it falls on 13th January. This festival is closely linked to another major Indian festival of Makar Sankranti which is celebrated all over India with different names. This year the Makar Sankranti falls on next day of Lohri but since its based on the astrological calculations when Sun enters makar or Capricorn zodiac it keeps changing over the decades.

This day also signifies the end of the winter season. The main celebration of Lohri is to burn a huge bonfire. People collect in large groups and they light this bonfire. Ten or fifteen days before the Lohri festival young boys and girls go around their locality to collect logs and other items that they can use to burn the Lohri.

The other items that are collected are jiggery and grains. These boys and girls also go from house to house collecting Lohri items. In some parts of Punjab a young boy is selected and his face is smeared with ash. A rope is tied to the waist of this kid. The idea is to dress the kid like those who do not want to give items for the Lohri celebrations. The householders who refuse to give Lohri items are threatened saying that they better give else this kid will enter the house and break clay pots. Some groups also sing the Lohri songs as they go about collecting the items for Lohri.

The idea of Lohri is basically to have fun in a group. If you happen to visit Punjab on the Lohri day you will be surprised to see the festivities that are associated with this day. On the day of the festivity the kids go from house to house singing Lohri songs.

The householders give those sweets and sometimes even money. Returning the kids empty handed is considered inauspicious. All the food items that the kids collect mostly consist of pop corns, crystal sugar, jaggery, peanuts, til, etc. These are collected and are thrown into the Lohri fire in the evening.

In some parts of Punjab the idol of Lohri goddess is made with cow dung and the Lohri is lighted under this idol. In some parts no such idol is made instead simple fire is lighted. The bonfire is usually lighted in the village square in the evening after the sun sets. People from all over the village gather across the Lohri with jaggery and sugar candies to be put onto the fire. People also sit around the fire.

Some also sing and dance on Lohri songs. Some people also offer prayers to the Lohri fire that is considered very auspicious. Prayers are made to thank the god of fire. Hindus who are settled in Punjab also offer water and milk to the fire. This is considered as an offering made to the sun god.

Even the Sindhi community celebrates something like Lohri that is called Lal Loi. It is not very popular and is celebrated only in some sindhi communities. In Punjab you can also catch people flying kites of Lohri. Flying kites on Sankranti is a common tradition that is followed across the different communities in the country.

Punjab is known for its food and so on Lohri special cuisines are prepared. Sarson da saag, Makki di roti, jaggery, ground nuts and Gajak are common dishes that are prepared in every household.

These were traditional dishes now days some modern dishes are also prepared along with these to make the meals even more enjoyable. Another traditional food item that is prepared on this day is called the til rice. It is prepared by mixing jaggery, sesame seeds and rice.

In cities many Punjabis have private Lohri celebrations too. They light a huge fire in front of the house and invite friends. The first Lohri of a couple is always a huge celebration. Similarly if there has been a new baby born in the family then too Lohri is a grand occasion. I

n cities people dress in bright clothes as they celebrate Lohri. They try to look traditional and their best. Drums called Dhol are brought for music and fun. People do bhangra (traditional dance of Punjab) along the bonfire.

The main aim of Lohri in cities is to ensure a fun time with family and friends. In the villages it is celebrated by the farmers as the harvesting festival. Traditionally sugarcane was harvested during the festival of Lohri. That is why sugar and jaggery is commonly used as an offering in the Lohri fire. There are many stories that are associated with Lohri. It is said that Lohri comes from the word ‘loh’ that means warmth if fire. Some also say that the name owes its origin to the name of Saint kabir’s wife who was called Loi.

Some parts of Punjab also call this festival as Lohi. Some say that Lohri and Holika were two sisters. While Lohri got burnt in the fire that Prahlad was put into by his father. Holika survived along with Prahlad. To remember the sacrifice of Lohri this festival is still celebrated all across the country while Holi is after Holika sister.

Many people associate the celebration of Lohri with the legend of Dulla Bhatti. He was the hero of Punjab. He lived during the times of Akbar. He was like the Robin Hood of Punjab in those days. He would rob the rich and distribute the wealth among the poor. Many a times he rescued girls who were taken to be slaves in Middle East.

He also got them married to boys and paid for the dowry. Among these girls rescued there were two girls called Sundri and Mundri who are even today associated with the folklore of Punjab. There are many Lohri songs that are dedicated to the brave deeds of Dulla Bhatti.

It is indeed interesting how Lohri transformed from a simple harvest festival to its current form. It is also interesting to know the many stories that are associated with the origin and celebration of this unique festival. We hope that this article on Lohri will help you to get a better knowledge about this colourful festival of India.