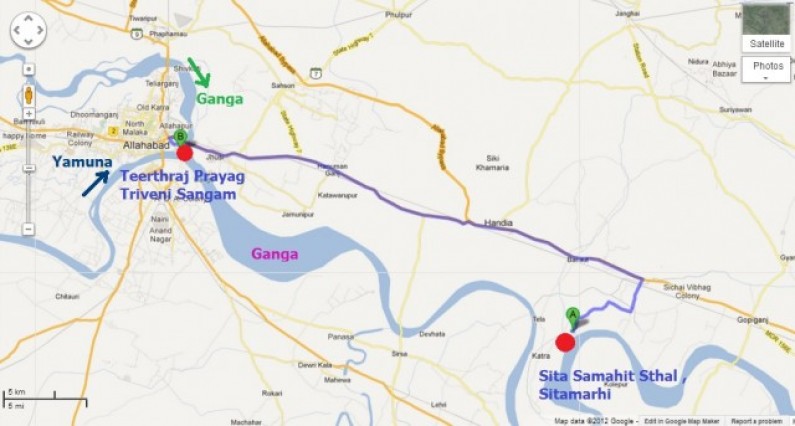 Wanting to find out the Purnima falling in the month of February, I stood before the calendar. Suddenly I realized that it is ‘Magh Purnima’ in the month of February. I was suddenly reminded of strict orders from to take bath early on this day and even add Gangajal to the bucket of water. Immediately after bath we were supposed to touch the rice, dal and black sesame seeds that were sent to the temple during later part of the day. Read the article and you will be able to understand the reasons behind these practices.

Normally the modern we, consider 14th Feb as Valentine’s Day but there is another special significance as per ancient traditions known as the Purnima. Pooranmashi refers to the full moon day of the month. The full moon day that comes in the Hindu lunar month of Magh is termed as Magha Purnima. It is one of the most auspicious purnimas that is observed in Hindu religion. In the year 2014, it is falling on Friday, 14th February. The month of ‘Magh’ is the eleventh month of the Hindu calendar. It coincides with the January – February of the Georgian calendar. Each day of Magh (Hindu Lunar Calendar) is considered extremely sacred and pious. Magh is the month during which the Kumbh and the Magh mela take place at the Sangam in Allahabad. It is one of the most auspicious purnimas that is observed in Hindu religion. Lord Vishnu is worshipped on the full moon day of the magh month.

According to the Brahma Vaivarta Purana, Lord Vishnu, the creator resides in the water of the holy river Ganges. It is believed that Lord Vishnu is highly impressed by devotees who take bath in the Ganges on the day of Magh Purnima. Even if a person touches the water of the Ganges it provides salvation from all evils. Devotees observe fasts, conduct shradh and make donations and charities on this day. A devotee worshipping Lord Shiva on this day as per the prescribed rituals receives benefit equal to performing the ‘Ashwamedha Yajna’ and also secures a place close to Lord Vishnu. The day starts by taking bath in the Ganga before sunrise and Lord Vishnu worshipped after that. The vagaries of modern life may not allow everyone to take a dip in the Holy Ganges on this day. The alternative is to take bath in the nearest river. If that too is not possible Gangajal (water of the holy Ganges) be added to the well in the courtyard and if that too is not possible it can be added to a bucket of water kept for taking bath. Kumkum, fruits, banana leaves, til, moli, roli, pan leaves, supari and panchamrit are offered to the Lord. The panchamrit is made using milk, curd, honey, tulsi and Gangajal. Prasad is made by roasting wheat and sugar together. Satyanarayan Katha is read. Food, clothes, jewels, turbans, shoes, ghee, laddoo, fruits and cereal are donated. Black sesame seeds are offered to the ancestors.

While bathing on this day a person should chant ‘Om Namah Bagvate Vasudevaya Namah’. It is a mantra of Lord Krishna an incarnation of Lord Vishnu. The mantra is also termed as a Mukti Mantra that promises freedom  from the cycle of birth and rebirth. It also forms the main mantra of ‘Srimad Bhagvad Geeta’. While some devotees may chant it like the Gayatri mantra others may sing it like a Bhajan.

As per the Hindu calendar, Magh Purnima 2014 is falling on the 14th of February this time around. Hope you enjoy the day and make the best of it as per the information given above.