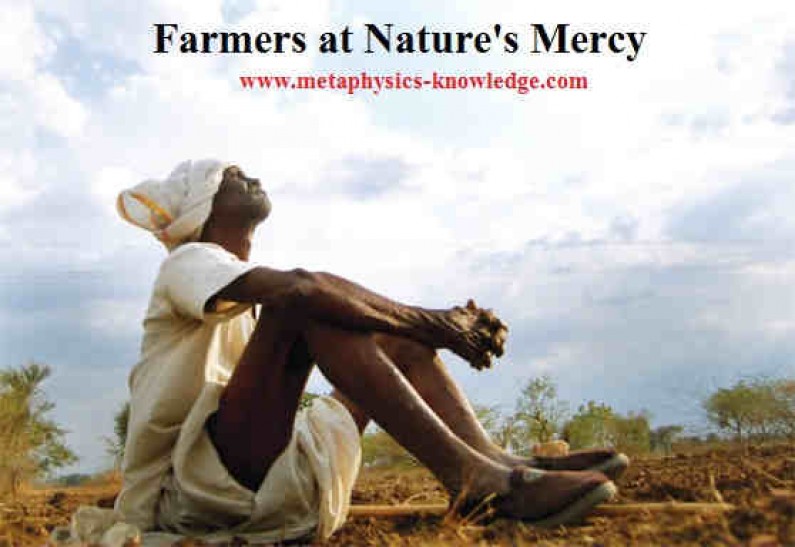 The moment the word farmer comes to our mind, we imagine a person who is totally at the mercy of nature as if the Mother Nature is some cruel official and the farmer is a helpless individual. There is certainly some element of truth to it but going deeper we will realize that actually it might be a misconception or a different perception.

The very mention of the word mother in front of nature is an indication that she cannot be cruel if even she is harsh at times. Most of the scientific thinkers would instantly refute this statement giving examples of droughts and farmers committing suicides. They would say that humanity has progressed a lot and we will make the farmers independent of nature in coming decades.

It is true that science has its importance in the scheme of things but we must also acknowledge and appreciate the fact that Nature has been around for quite some time – from the beginning of the universe that is to say – which is much more grand a time as compared to the time homo sapiens first appeared in a tiny corner of this humongous universe.

Actually it depends on what we call Nature. Basically we mean the intelligent life force which permeates each and every particle of the universe and not just the clouds or sun etc. So just remember while thinking along the lines mentioned in this post.

Whatever we do in science is within the very limited framework which Nature itself has provided to us, including the very bodies and brains which are a byproduct of evolution so it would be a farce to think otherwise.

The Sun is a creation of Nature, with the plants and their internal biological growth systems and mechanisms all belong to Nature. The genes within those plants which the genetic engineers claim to modify are also a product of Nature and the human body which is able to eat those plants and digest them and change them to energy for life are all processes which have their patent with one and only – Mother Nature

Would it not be absurd to say that the intelligent life force which sustains all this is cruel to the farmer. It starts to seem illogical to think so even after just a slight reflection

Having said that, the hard fact remains that thousands of farmers commit suicide each year especially in developing countries like India and other Asian countries. We are not saying that it is false but the reasons for that have to be found among ourselves and our systems, not with Nature.

There are million reasons which changes the balance and cycle of Nature which leads to inefficiency in the production systems and some of these reasons are:

-> Excessive use of chemicals

It would be too lengthy if I were to go in detail of each of these reason and even this list is just indicative not exhaustive. Yet this partial list is sufficient for anyone to reflect and understand that we should not blame Mother Nature for the ills of the farmers. It is true that sometimes untimely rains and calamities affect crops but Nature has its own ways to adjust things from the higher grand perspective.

In the ancient times when the techniques of farming were not so developed in the modern sense, we ate a lot more pure fruits and vegetables and diseases were less prevalent. Now that we understand its significance we are returning to the roots in the form of organic farming and all that.

Farmers of the yore had a way to commune with Nature and maintain their balance which got lost in the race between mechanization and the race to defeat Nature, which in itself is a misnomer. It is only a few have understood that instead of fighting or winning over Nature, we need to live in harmony with it, for we would only stand to lose in the long run otherwise.

So it is high time we stop blaming Nature and look within ourselves as an individual, society and institution and find ways and means to uplift farmers