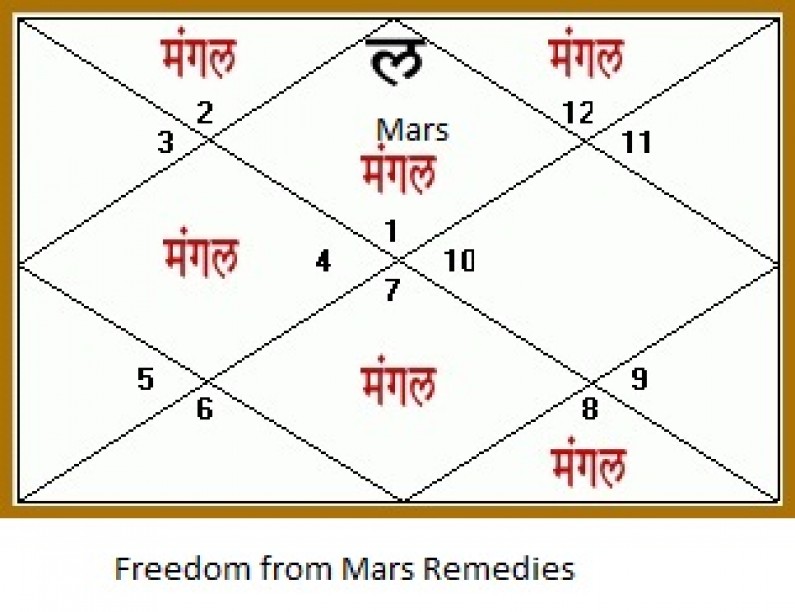 What happens when Mangal is placed in an unfavourable position in your horoscope? Well as per the Hindu astrologers it can cause a delay in marriage, it can also lead to the marriage being bad and ending in divorce. If the Mangal is in a very bad position it can also cause death of the spouse. As per vedic astrology Manglik is not a good situation in a horoscope, so let us find ways and means to overcome this issue

What is Mangal Dosha?

Mangal is the Hindi name for Mars. It is a very important planet as per astrology and people who have it in their 1st, 4th, 7th, 8th or 12th house of the horoscope are considered to be suffering from the mangal dosha. These people are also called Manglik. .

However, to ensure that this condition does not have a very bad effect on the life of the people there are some remedies that are recommended by the experts and must be followed. The degree of Mangal dosha also changes from person to person.

Some people are very badly affected by the Mangal dosha and for some the influence of Mangal dosha is lesser than the others. According to how strong a Manglik you are the remedies are suggested by the experts.

Many people actually do not take the Mangal dosha seriously but the experts are of the opinion that it is not a good thing to have in a horoscope and the remedies are a must. If a person is a manglik it is mandatory that he or she gets married to a manglik itself else the marriage can have very bad results.

For example the very popular actress Rekha is a Manglik and most of her marriages have had very bad results and even death of her husbands. The experts are of the opinion that no matter what science says the fact is Mangal dosha is a reality and it must be dealt with else the person can never enjoy a good marriage.

Few years back Aishwarya Rai was in news as she was performing the remedies for Mangal dosha. Many people thought it was ridiculous but the astrologers feel that it was required to ensure that her marriage with Abhishek lasts.

Mars is supposed to be the deity of war. The planet is red in colour symbolizing blood and that is why it is considered to be a very ferocious planet and is always engaged in fights. The people who have mars in a ruling position are very commanding and seldom want to adjust.

The Mangal dosha is considered to be worse for women than it is for men. However, both a man as well a woman with Mangal dosha must perform the required remedies to ensure that they have good marriage and that gives them peace and stability. Mars is often associated with passion and anger as a result people who have Mars in a dominating position suffer from hypertension even at a younger age.

Why those having Mangal dosha are advised to marry late? Well the reason is that after the age of 28 the effects of Mangal on the horoscope start to reduce as a result it ensures that those who have Mangal dosha get a better chance to have a proper marriage.

To reduce the impact of Mangal dosha you can also regularly visit a Hanuman temple or a Ganesh temple. Offering prayers to them and visiting their temples will automatically reduce the effects of Mangal in your horoscope.

Red is the colour of Mars. If you want the favour of the Mangal always carry a red handkerchief or wear red clothes. It will attract the cosmic energies of Mars and help you deal with Mangal dosha better. There are a number of gem stones that are recommended for people who are suffering from Mangal dosha. These are Rudraksh with eight mouths. This Rudraksh is a symbol of Lord Ganesh and gives the person who is wearing it the ability to deal with problems and face all issues in life without hassles.

In case of Mangal dosha the Rudraksh with fourteen mouths can also be worn. It will ensure that you get the will power of Hanuman and deal with the problems.

Red coral is also a gem that is often suggested to deal with the Mangal dosha. It is a red colour stone that can help the person who wears it to deal with the problems he or she is facing in life in a better way. It can also protect your body from the diseases that you can develop when you are under the influence of Mars.

Nevertheless, as we always mention about gem stones do not wear them until an astrologer advises you to. Just because you have Mangal dosha does not mean that the coral will work for you. It also depends on the position of other planets in your horoscope.

The same goes for the Rudraksh too. Rudraksh must be worn only after consulting an expert. Only few people know the true worth of a Rudraksh and how it must be worn.

There are many yantras that are called the Mangal yantras they are available in the markets and with astrologers. You can buy one of these and keep them in your house or with you. It will reduce the negative effects of Mars from your life. It will make your marriage more harmonious. It will also ensure that you meet a suitable life partner.

It will also ensure that you get material comforts in life and your financial problems reduce. You must worship this yantra for 21 days to ensure that you get a good partner. How you are supposed to do the puja depends on the yantra and the person you are buying it from will be able to advise you on how exactly the yantra must be worshipped.

There is a Mangal dosha nivarana puja that can be done by those who are suffering from the ill effects of Mars. This puja is performed by experts and is actually a combination of many pujas together. It can be done in your house or also in a temple. This puja is a combination of many pujas and is performed by a team of priests. Some of the pujas that form a part of this puja are.

Navagraha puja, Ganesh Puja, Shiva puja, mangal homa and many other pujas are a part of it. Basically it is a puja that goes on for hours and almost all the gods are offered prayers to ensure that they bless you and the impact of Mangal in your horoscope reduces giving you a better and happy life.

At the end of the puja a good donation must be done to the priests who have performed the puja and if you are doing it in a temple then the donation must also be given to the temple.

Sankat mochak is a very popular Hanuman temple in Varanasi. If you want you can visit this temple and do a puja to ensure that the ill effects of Mangal are removed from your horoscope. You can also visit this very ancient temple and get blessed by the lord even if you do not have Mangal dosha. Visiting this temple and fill you will positive energies.

Marrying the Shivlinga or Banyan tree

Women who have Mangal dosha must marry Shiv Linga or a banyan tree before they get married to a man. This will make the Shiv Linga or the banyans tree her first husband and as a result the impact of Mangal dosha will be lesser on her marriage. Many educated people are against this ritual but it is believed to be a good remedy my many.

The last but the most important point is that no matter what remedies you have used always try to ensure that you marry after attaining 28 years of age. If you have Mangal dosha you must match your horoscope with your prospective bride or groom. It is mandatory that a person who has Mangal dosha in his or her horoscope must marry a person who has the same problem even in his or her horoscope.

Stability in marriage is something everyone wants. No one wants their marriage to end on a bitter note or with a tragedy. This is exactly why we recommend that the remedies that we have suggested above for Mangal dosha are followed by those who have Mangal dosha in their horoscope.

These will definitely ensure that you have a better and peaceful marriage. We must mention that these are a generic list of remedies and only a professional astrologer will be able to tell you what exactly you must do. He will definitely suggest one or two of the above remedies and along with that he may suggest something else too.