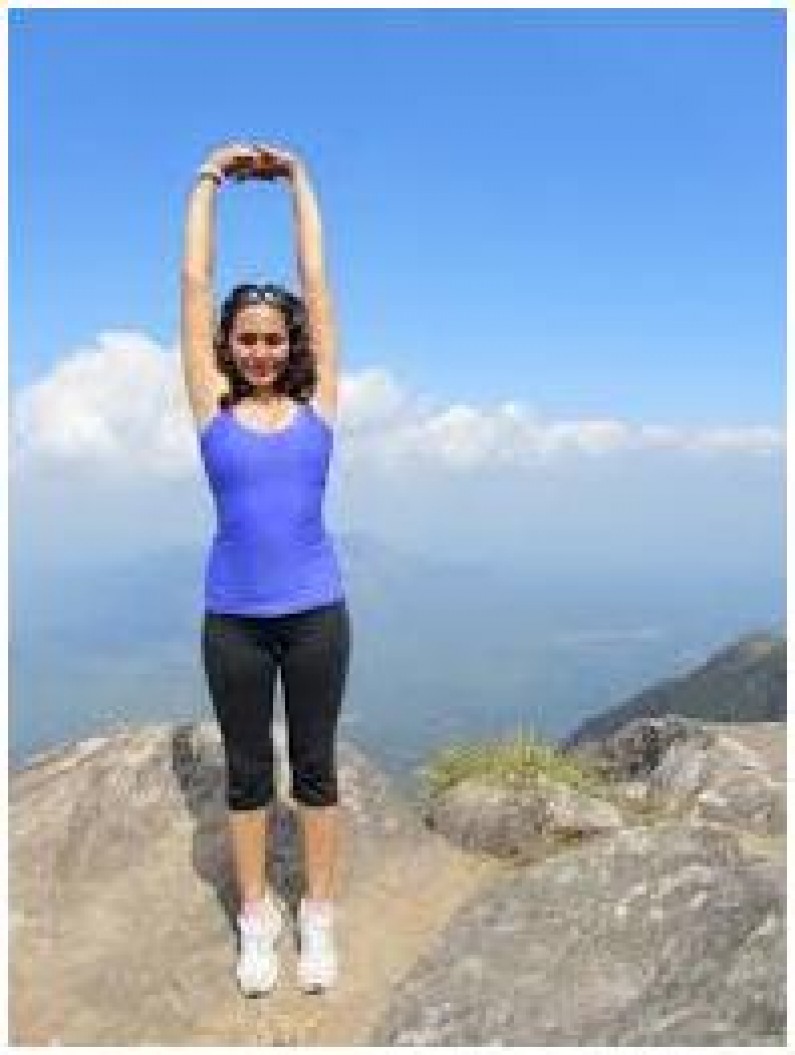 Let us learn a few basic yoga poses and start with the famous tadasana or the mountain pose. Do remember that in practicing an asana, the focus may be simultaneously on the sense of feeling, the body, the mind and what is termed “myself”. The subsequent paragraphs try to elaborate on these aspects as related to tadasana.

In Tadasana, one of the most basic yoga poses, attention can first be given to the meaning of the name which is as follows:

It will become quite evident that the mind is not willing, able or in the mood to concentrate. Several phases are involved. The mind is like a central station where everything pours in that the senses perceive, and it has to make interpretations from those perceptions. There are many choices for the mind to make. In this case it must find the meaning for the aspirant of mountain and standing still.

Here is an example of how to do this

These are good simple starters to help the individual to think in areas that may have been neglected for too long.

The first thought is, I am standing ….here…still…only after this acknowledgment can the idea of mountain occur, and “what a mountain means to me.”

Tadasana-standing still, when repeatedly practiced with observation on the body AND the mind will bring many insights: For some people words may tumble into the mind immensity, power, great, strength, obstacles, avalanches, destruction. For others the words come slowly, like beads on a string, with only a vague meaning attached to them. Depending on the strength of the accompanying emotions, those ideas/words are pursued further, or fade. Personal associations may surface, such as: being alone, lost in the mountains, there in nobody there to “stand” by this kind of thought because in general people keep themselves busy in order to avoid thinking too much.

When the mountain is a symbol for obstacles, preventions vision or perspective, emotions like fear can run very deep.

The obstacles in life may appear “mountainous” with no one standing by. When one begins thinking about oneself with the help of symbols, awareness comes little by little; or in the case of “I am alone, “with the overpowering strength of a mountain. We, are of course, are always alone and die alone if this thought is disconcerting, it is because it has been suppressed from awareness. Reflections of this kind are a good preparation for meditation.

In fact, for most people, meditations is more like reflection as shown below Standing up, standing straight, looking ahead, facing what is in front, keeping balanced, resisting movement, running away from, becoming aware of the body that stands erect, raised from a slumped position. Depression, shoulders stooped from carrying weight-whose weight? Wanting to stretch beyond what limits?

Reflection: What is mountain made of? Heaps of earth, rock, come pressed stuff of an enormous size. A mountain is immovable , a frightening rise, apparently haphazardly structured, invoking the image of possible avalanches under which one could be buried. Are these like my insurmountable problems which have been allowed to accumulate and compress? Descending the mountain, giving up, looking down at the terrifying steepness; ascending the mountain, finding a way, growing the exhilaration of the view from the elevation… contrasting pictures in the mind. Up or down, good or bad, disaster or success, all these thoughts leads to moderating the mind as well as the emotions.

Space to stand on, space above, space all around; who stands-a person? an actor? a shell? a ghost? Where do I stand? Standing up for myself. For someone else; being true, straightforward; where do I stand on important principle, ideals, ethics, decisions, beliefs, convictions? Do I stand on my own two feet?

The mountaineer is challenged by the awesomeness of the mountain, and by the obstacles that it presents-taking pride in achieving, in the idea of conquering the mountain-until fear is conquered by accepting the challenge and surmounting the difficulties.

So as you can see even the basic yoga poses have a deep significance and meaning. Who is not inspired by the view of snow –capped mountain? Mountains have greatness and dignity. To ascend a mountain demands an optimum of strength and stamina Mount Everest with its tremendous physical challenge lures many mountaineers. Nearby is a legendary holy mountain Annapurna, which presents the same kind of challenge for the spiritual aspirant.

The mountain is a symbol of the aspiration to transcend one’s little self. It also stands for purity and selflessness. The process of ascent is spiritual pursuit toward a solitude in which the rational mind must surrender its dominance. All intellectual activity has to recede to allow the mind periodically to be in its original state. Here at an elevated place is found quite for meditation, for going within- rising above the dualism that invites constant battles is psychologically necessary to gain knowledge through certain experience that are above positive and negative.

The mountain is a symbol for more than transcendental imagery. As the symbol of the Center, “the Sacred mountain –where heaven and earth meet –is situated at the center of the world .Every temple or place- and, by extension, every sacred city or royal residence-is a Sacred Mountain, thus becoming a Center.” Ashrams and their residences for holy people become the center, the meeting ground, on which the battle of the Gita is fought.

With its valleys, ledge, and numerous caves, the remnants of underground streams, the mountain tells the story of how, for thousands of years, it has benefited all who have lived on it. The caves have given shelter to seekers who have retreated into them to enter the solitude that allows communication between those two worlds – that of the individual and of the surrounding world-to listen to the rocks sing, the rumble of the mountain spirit, or the voice of the prophets . In the caves of the mountain occurs the transformation that takes one beyond the rational mind. This is a process of rebirth. It is like retiring into an enormous womb, to emerge anew.4 for those who would go to the mountains to spend time in seclusion for meditation, who have the stamina and courage to retreat in this way, the ascent can be the preparation. Whatever one’s accomplishment in Hatha Yoga, Tadasana-the mountain posture- can lead one through the maze of thoughts and remove the obstacles, to achieve the first rung of the ladder. Like Tadasana, the T’ai CHI POSTURE “Return to mountain “symbolizes a return to the inner stillness that gives one the power to climb beyond the ego.

The mountain, than, symbolizes the ascent toward the goal one wants to attain. Mountains, as the abode of the gods, are comparable to the sources of wisdom from which knowledge radiates in all directions, like rivers that flow from the mountain to fertilize the land.

The Gods who supposedly reside on the mountains may at one time have been human beings who rose above mediocrity to realize a potential they recognized within themselves.  These Gods, geniuses in spiritual evolution, provide the balance of quietude for the restlessness of the world and its mental emotional activity. With this polarity, each complements the other. In the I Ching, the fifty-second hexagram is called “ken/ Keeping Still, Mountain.”In its application to man, the hexagram turns upon the problem of achieving a quiet heart.

Quietness will surface and, by this new process of thinking the mind will recede a little a time. One has to be ever on the alert not to be caught in an avalanche or mountain slide, under which everything is buried. Confidence must not become over-confidence and, while risks have to be taken, they must not be reckless, but tempered with the power of discrimination, with the strong desire for clear vision. Then one will be like the Greek gods on Mount Olympus.

Mount Meru represents, for the Hindus, the axis around which the world turns, motionlessness with constant motion, the impenetrable paradoxes. Kailasa is the abode of Shiva Lord of Yoga, called the great Compassionate Lord. Devoted Hindus wish make a pilgrimage to Kailasa once in their lifetime. It was at Mount Kailasa that Vivekananda had a vision of lord Shiva, which he could not transmit to his disciple, Sister Nivedita, who accompanied him on that pilgrimage. Vivekananda cried out in agony at the recognition that he did not have the power of his great master, Ramakrishna, who was able to transmit knowledge. A mountain like Vesuvius can be alive with an inner fire. Where Passion for the Most High burns within the aspirant like a volcano, an inner explosion throws out the ashes of things that are no longer needed.

People of the deserts and plains where there are no mountains, as in Egypt, the Yucatan, and South America, have attempted elevation by building pyramids-structured mountain. On top of the mountain or pyramid there is a wider vision. Everything diminishes to its proper size and loses its exaggerated importance. The mountain never mover; it seems to stand there solidly forever. Yet mountains do move imperceptibly-except for avalanches or eruptions. The division between the movable and the immovable vanishes. Elevating thoughts appear from the horizon as from nowhere and these take one to mountain top within.