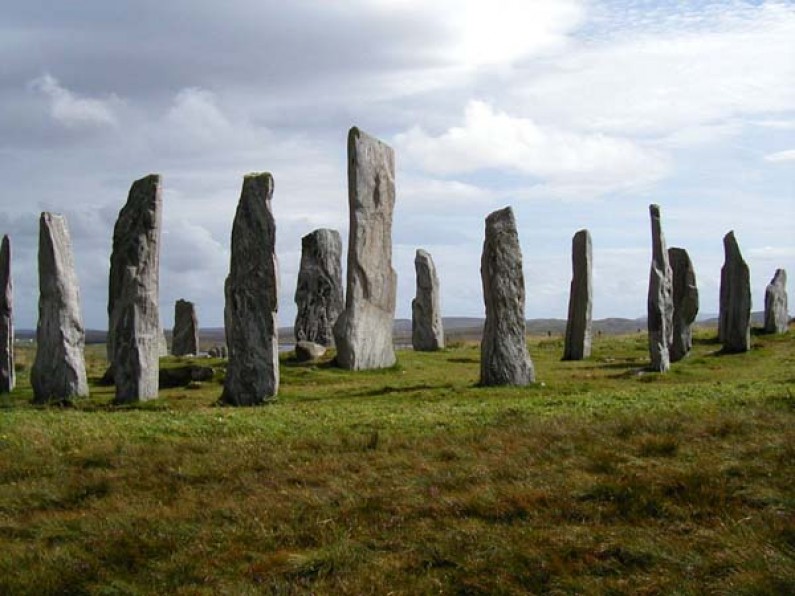 This is an interesting story about the Callanish standing stones and is narrated in four parts, this being the first part, followed by

You can go directly to any part by clicking on the links above (still to be published).

One summer evening in 1934, after a hard day’s sailing up the west coast of Scotland, an Oxford University professor took his boat into Loch Roag on the Isle of Lewis to find an anchorage for the night.

A full moon was rising over the hills, and silhouetted against it was a most impressive sight: the tall standing stones of Callanish, the ancient monument that has been called the Scottish equivalent of Stonehenge.

Professor Alexander Thom went ashore, and, standing in the middle of the mysterious stone circle, he noticed that according to the pole star the structure was aligned due north-south. This observation fascinated him, for he knew that in the days when the stone circle was constructed there was no pole star because its constellation hadn’t reached its present position.

He wondered whether the alignment was a chance occurrence or had been deliberately planned. If it was deliberate it would probably be found at other megalithic sites.

Thom decided to check whether it was, and thus began 30 years of painstaking study, involving survey work at no fewer than 450 sites in remote spots in the British Isles, which led to the publication in 1967 of his book Megalithic sites in Britain, and in 1971of Megalithic Lunar observations.

It also led to a revolution in thinking about European prehistory. It had previously been assumed that barbarians had inhabited Western Europe in prehistoric times, when civilization had first arisen in the Middle East.

Thom’s findings demanded a radical change of this view. “I’m an engineer,” he wrote, and indeed his professorship was in engineering. “I’m certain these people were too-and proud of it.”

By “these people” Thom meant the megalith builders. The word megalith comes from two Greek words meaning simply “large stone,” and its adjective is used for a variety of structures from single standing stones known as menhirs, to structures in which three standing stones support an immense capstone, known as dolmens or cromlechs and to piles of rough stones burying a tomb or serving as a memorial or landmark, known as cairns, and of course stone circles.

Professor Glyn Daniel of Cambridge has estimated that there must be between 40,000 and 50,000 megalithic tombs or temples in Western Europe. The question of who built them has given rise to at least as much speculation and controversy as any other question in archaeology.

The phenomenon is not exclusive to Western Europe, but it is peculiarly concentrated there, particularly in the form of menhirs and stone circles. The practice of building tombs of stone-and dolmens are thought to have been tombs-is a natural development from cave burial.

As such it might be expected to occur spontaneously in different parts of the world. But the erection of single standing stones, or avenues or circles of them, is a practice that at first consideration appears rather pointless.

As the French archaeologist Professor P.R. Giot wrote of the standing stones: “whether isolated or in groups, they remain enshrouded in mystery. This is no doubt why their study has, unjustifiably, been comparatively neglected. . . . With the very limited evidence at his disposal, interpretation of single menhirs is one of the archaeologist’s nightmares.”

The mystery is deepened when we think of the labor involved. All other archaeological evidence bears witness to the fact that the inhabitants of Western Europe at the time when the megaliths were erected were neolithic farmers living in small communities who possessed only the most primitive tools and technology.

Professor Richard Atkinson, the Englishman who excavated around Stonehenge, estimated that the transport of the 81 sarsen stones from Avebury, some 15 miles away, would have taken 1500 men working continuously for 5.5 years.

And the construction of nearby Silbury Hill (which is not a megalith but is of the same period) he reckoned would have taken 18million man-hours.

In the 1830s a capstone from a megalithic tomb near Saumur in France was moved to serve as a bridge. It took 18 pairs of oxen and enormous rollers, each consisting of four oak tree trunks lashed together, to shift it.

The great stone known as the Grand Menhir Brise in Brittany, which now lies broken on the ground, weighed about 380 tons and stood 60 feet high. In the famous nearby avenues of menhirs at Carnac there are no fewer than 3000 great stones. The labor involved in erecting them, and the thousands of other stones and stone structures in Brittany and the British Isles, was prodigious.

The idea that they were erected by giants or magicians long prevailed, and a form of it has even been seriously proposed by a present-day British writer on the subject, John Michell. But if we do not allow ourselves flights of fancy about supernatural engineering we must assume that the megaliths were erected by manpower. The question of why such prodigious manpower was put to such a purpose then becomes one of the most intriguing puzzles that enigmatic relics of the ancient world pose for modern man.

John Aubrey, the celebrated 17th-century English antiquarian and diarist, was out hunting with some friends just after Christmas, 1648 when they came to the village of Avebury. There Aubrey experienced a revelation. He realized that he was standing in the middle of an immense prehistoric temple. Where others saw, and for centuries had seen, only a lot of old stones and a few mounds, Aubrey saw evidence of a grand design.

The design stands out quite clearly on a modern aerial photograph, even though today there are far fewer stone at Avebury than there were in Aubrey’s day, thanks to the efforts of such men as the 18th-century farmer known as “stone-Killer Robinson.”He devised a means of breaking them up by toppling them into fiery pits and administering a dash of cold water and a hammer blow.

The Avebury circle is so large that the medieval village has grown up within it. It was its size that had hidden it from view and made its component stones seem a mere random assembly. Stonehenge however could not be ignored. Standing on the open Salisbury Plain, its great stones clustered in an obviously manmade design, it invited speculation about the men who had built it.

The 12th-century English historian Geoffrey of Monmouth had written that it was built about A.D. 470 as a memorial to 460 ancient British chieftains massacred by Hengist the Saxon. His view prevailed, for lack of a more authoritative one, until the 17th century, when British royalty began to take an interest in Stonehenge.

King James I of England visited it, and had his architect Inigo Jones makes drawings showing its original construction. Jones expressed the opinion that it had been built by the Romans in the first or second century A.D. in honor of the God Coleus, and that it could not possibly have been built by the “savage and barbarous”early Britons.

They, he said, would have been quite incapable of achieving such “stately structures, or such remarkable works as Stonehenge.”John Aubrey was less scornful of the early Britons, or of their priests, the Druids. When asked by King Charles II to survey the site and write an account of it, he stated that its history went back beyond Saxon and Roman times.

Referring to both Avebury and Stonehenge, he wrote that since the Druids were “the most eminent order of priests among the Britons, it is most likely that these monuments were the temples of the priests of the most eminent order, the druids, and it is strongly to presume that they are as ancient as those days.”

Aubrey’s view was taken up and elaborated in the next century by Dr. William Stukeley, whose book, Stonehenge, a Temple restored to the British Druids, was extremely influential. It inspired so much other fanciful literature about Druids and their practices that the popular view has prevailed down to our day that Stonehenge was erected by Druids for purposes of ritual sacrifice and sun worship.

The discovery that it might have been used to predict eclipses has been, as it were, added to this view by proposing that the possession of such an expertise would have enabled the Druidic priesthood to manipulate ignorant people by demonstrating apparent magical powers over the heavenly bodies.

We know about the historical existence of Druids from references in the writings of Julius Caesar. Possibly Stonehenge and other monuments throughout Britain were used by them, but they certainly did not erect the megaliths, and Stonehenge was built much earlier than 460 B.C., as Stukeley had conjectured.