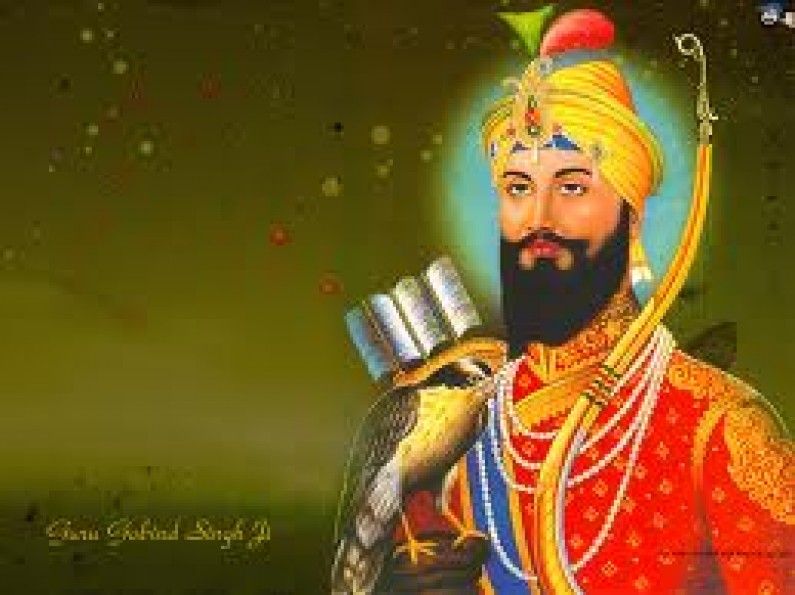 Guru Gobind Singh Ji is the tenth guru of the Sikhs. The only son of Guru Teg Bahadur and Mata Gujri he was born on December 22nd in the year 1666 and was called Gobind Rai. As per the biography of Guru Gobind Singh Ji he followed his father as the Guru of the Sikhs when he was not even ten years of age, when his father was martyred at Delhi. In this article we briefly look at the great Guru’s life.

I love having Guru Gobind Singh Ji’s wallpaper on my laptop. Thinking about what attracts me to him is his enigmatic personality shown to be standing tall and proud. Irrespective of the grit, the compassion in his eyes cannot be missed. I decided to study a little more about his life.

Guru Gobind Singh bestowed his presence on this earth in the winters of 1666 at Patna and was initially known as Gobind Rai. The time when he was born his father was travelling across Assam and Bengal spreading the word of Sikhism. Later the family moved to the present Anandpur Sahib, Punjab and the place where the great Guru spent his childhood now stands the  holy shrine of Takht Sri Harimandar Sahib, one of the five most important seats of religious authority for the Sikhs. His early education took place at Anandpur Sahib where he learnt read and write Punjabi, Sanskrit, Braj and Persian.

Gobind Rai grew in the presence of learned and brave men. The father and son would spend a lot of time together and Gobind Rai would observe his father very closely. As it is recorded in the Gurbilas Patshahi 10, one day Guru Teg Bahadur was visited by Kashmiri Pandits who Kashmiri Brahmins – Asking the Ninth Guru to help them

complained of Mughal atrocities and religious fanaticism and asked for help from the ninth Guru. As the Guru sat in deep thought, Gobind Rai asked his father why did he seem preoccupied.

The father replied that earth bears heavy burdens and to redeem her of these burdens a true and a worthy person would have to lay down his head. The young Gobind Rai said in an innocent and a child like voice that there could be no one worthier than you to make a sacrifice. Soon Guru Tegh Bahadur left for Delhi and courted death on November 11, 1675.

Guru Gobind Singh – A nationalist, a warrior, a spiritual guide

A warrior, a spiritual leader and a nationalist Guru Gobind Singh played multiple roles for his followers. He spent most of his time fighting against oppressive and suppressive policies of the unjust rulers. A nation builder with unique capabilities he stood for building a society that was based on righteousness, liberty, fraternity and equality for all. He did not hesitate to sacrifice the lives of his young sons to stand against oppressive and unjust policies. Anandpur Sahib Ji on the day of Baisakhi in the year 1699. The Khalsa Panth was established with the aim of urging the followers to commit themselves to unity and a pure life as taught by the nine gurus.

and was to stay away from adultery. He ordained the Guru Granth Sahib as the next Guru and vested the Kahlsa with administrative and regulatory powers.

Guru Gobind Ji had to vacate Anandpur Sahib Ji in 1704. He did it in complete good faith without any knowledge that he would be attacked at night while crossing rivulet Sirsa. What followed was a fierce battle with the Mughals at Khidrana the present day Muktsar.

Sri Guru Gobind Ji’s sacrifice is unmatched. Right from his great grandfather to his youngest son all were sacrificed for up keeping the ‘Khalsa’