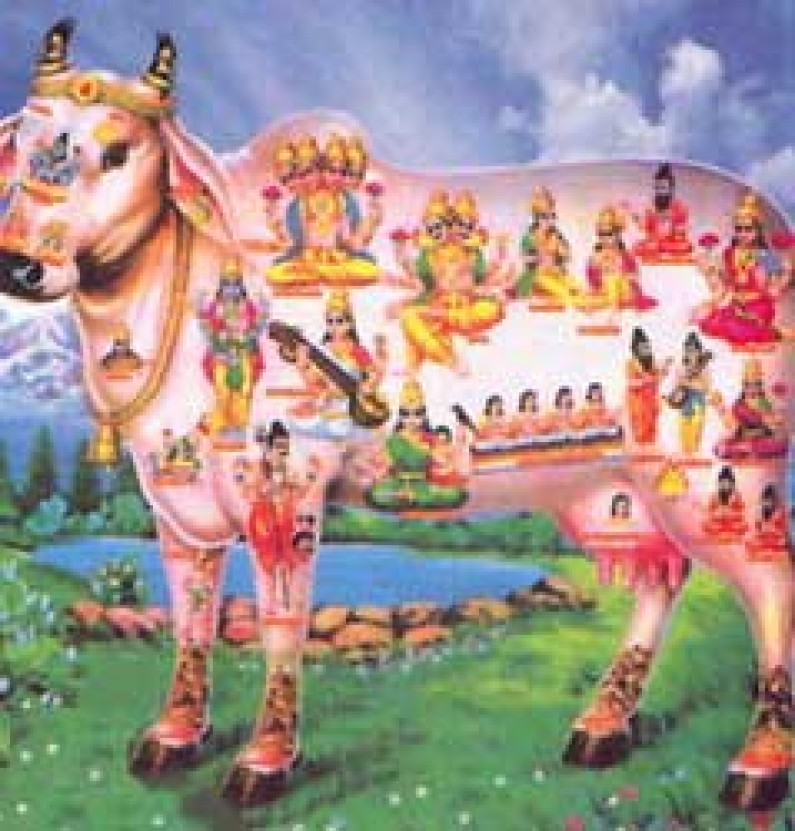 As far as spirituality is concerned, killing of any living being has been said to have a negative impact on spiritual growth. Especially the slaughter of cow has been an issue of not only spiritual debate but political debate as well. So let us take a look at this issue from the metaphysical aspect

Animals have been a part and parcel of countries such as India since times immemorial and most of the deities have animals as their conveyance. For example Nandi bull is associated with Lord Shiva, mouse with Lord Ganesha and so forth. It is said that when you say something into the ears of the bull it is communicated to the lord himself. Almost in all temples you will find the idol of a bull. You will also see people whispering their wishes into the ears of the bull.

Not only in Hinduism as well as in Jainism and Buddhism the cow is considered to be sacred and very powerful. Infact the purity and innocence of the cow can be gauged from the fact that it is called as the Gaumaata or Cow – The Mother. Also check out your knowledge of cow taking our Cow Quiz

If we look at the Vedas they too mention that the cow must be worshipped. It mentions that if a cow is donated it can bring in a lot of blessings. Especially when the cow is given to a Brahmin it is considered to be a very good sign. In the ancient temples you will find a lot of sculpture of the cow. Mostly white and brown cow is mentioned in most of the religious books. The practical implication can be the fact that cow gives us milk. It gives us cow dung that can be used as fertilizers. The milk is used to make cream, ghee and other dairy products which are all good for our health.

As cow gives us all these things it can be considered as very important for life. The Upanishads mention that as the mother nourishes her children with milk the cow nourishes the normal humans with her milk. This is exactly why she is called the mother.

The cow has been worshiped in India for ages. Feeding the cow on special pujas is considered auspicious. If the cow is not fed the puja is considered to be incomplete. The cow is decorated with colourful clothes and jewellery. Most of the rural houses have at least one cow. These cows are kept well as family. They are fed and also nourished with a lot of care. The cow is given bath and it is ensured that they are kept well. It is believed that if the cow is tortured then the whole family and even the village can be cursed. On special occasions Aarti of the cow is done like that of the gods. The cow is fed and given rest on these days.

Cow is generally a calm animal and can be domesticated easily. This is exactly why it can be found in almost all the rural homes. The cows are allowed to enter the temples. No one scolds them or raises their voice against them. They are treated with a lot of love and respect. This can be seen in Dwarka temple.

Dwarka is a dham and is considered as one of the most powerful temple towns in India. When there was war between India and Pakistan a lot of shells were fired at the temple however none of these shells were able to harm the temple. This was because the shells did not burst at all. Lord Krishna used to live in Dwarka as it was his capital. He is considered to be the avatar of Lord Narayan. Krishna was very fond of butter and He used to steal it and could go to any extent to get butter. Cow was his favourite animal. You will see a lot of pictures of lord Krishna with cow. It is said that lord Krishna is present in the cows that we see. This is another reason why cow is considered to be very sacred by the Hindus.

Many Hindus are non vegetarians. They eat fish, chicken, egg and even mutton. However, you will never find a Hindu who will eat a cow. Of course these days this statement might not be fully true but still it is largely so. This is because eating cow is like a huge sin for the Hindus. The 1857 Sepoy mutiny that happened in India was because of this. These were the days when India was under the British rule. The Britishers used cartridges that were smeared with the fat of cow and pigs. Cow was sacred to the Hindus and the pigs were considered untouchable by the Muslims.

When the Indians in the British army came to know this they decided to raise arms against the British. Almost all the Indians in the British army headed by Mangal Pandey raised a huge revolt. The revolt became so strong it seemed that Britishers will finally have to leave the country. However, the Britishers were able to control the revolt and Mangal Pandey was hanged. This was the first battle of Independence in India that was triggered by a cow. This revolt made the British believe that they have to divide the unity of the Hindus and Muslims. This is how they started the policy of divide and rule. This revolt is the best indicator of how powerful a cow is considered in our religion.

The skin of cow (along with other animals of course) is used to make leather. This is exactly you will see that Hindu’s hardly use any items that is made out of leather. The cow is also mentioned in the teachings of Mahatma Gandhi. He said that cow is a provider of life to most of the human beings. He said that the sacred cow must be protected and only then will India proves what it stands for.

Thoughts of some religious Gurus

Acknowledgement: this video has been taken from Manorama News and Sadhguru channel. Metaphysics Knowledge does not lay any claim on this video and it has been put purely for demo purposes as it is related to topic of this post.

You can also check out our post on cows in India vs abroad where it has been shown that even though cows are not considered sacred in teh western world, perhaps their condition is much better so we really need to improve things back home as well.