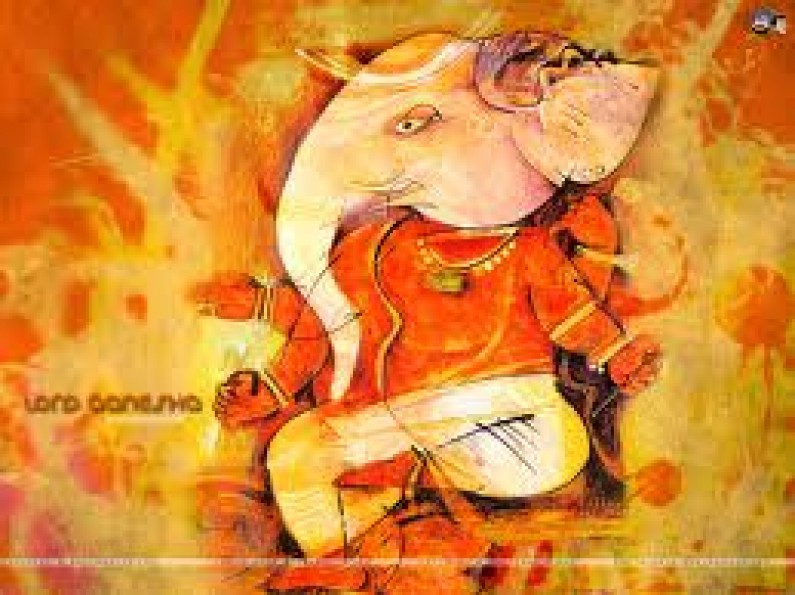 Lord Ganesha is known as Sri Siddhi Vinayak. He is worshiped before every new activity starts. Even before puja of any god Ganesha is worshipped. It is belived that he can remove any obstacle and hardships from the life of the people who worship him. He is also known as the elephant god. The story of lord Ganesha is very interesting and that is exactly what we will be discussing now.

The Stories Of Lord Ganesha

Lord Ganesha is the son of Shiva and Parvati. Parvati was requested by the gods that her son was required for the benefit of the world. She one day was taking bath and suddenly she thought she should perhaps have a son so that he will always be with her. She used the turmeric paste from her body to make a sculpture of a small boy. She used her tantra powers and imparted life to the idol.

This was how Ganesha was born. Parvati named him Vinayak. In this whole process lord Shiva was away meditating. As a result he was not aware of his younger son being born.

Beheading Of The Lord

Few days after the birth of Ganesha lord Shiva came back to Kailash as his meditation was over. On reaching Kailash he went to meet Parvati directly. Meanwhile Parvati had gone to take bath and she gave Ganesha the duty to not allow anyone to enter the area while she is taking bath. Ganesha like an obedient son was guarding the area.

When Shiva came Ganesha stopped and told him not to enter the area. Lord Shiva lost his temper and as he was not able to recognise Ganesha. He in his anger cut off Ganesha’s head.

When Parvati came back she was upset to see that her beloved son was dead. She started to cry and lost her temper. Lord Shiva had to do something to console her. He realised his mistake and he immediately went to his servants. He told them to go in north direction and get the head of the first animal they come across. As ordered the servants went. They found a white elephant sleeping. They cut the head of the elephant and took it to Kailash. Lord Shiva then used the elephant head to replace the head of Ganesha. This is exactly why Ganesha has a brown body and a white coloured head.

When Ganesha was alive again, he was a little upset that he now had to live with an elephant’s head. Shiva blessed him and said that he will always be the first god to be worshipped before any event and puja. Whether it is birth, buying a new house, start of an exam Ganesha is always worshipped. Even at temples the first idol is always of Ganesha.

All the devotees must first worship Ganesha and then worship any other god. This trend is still followed. Lord Shiva also said that Ganesha will be worshipped every year on the Chaturthi. This is how every year Ganesh Chathurthi is celebrated all over India.

Lord Ganesha was very intelligent. He was worshipped for knowledge. Lord Ganesha had two tusks like any other elephant generally has. However, he wanted to become immortal. Like Hanumaji, parshuram, etc. So that he lives even after this world ends and a new world begins. To attain immortality he went and fought with Parshuram. Parshuram in his anger broke one tusk of Ganesha. After this he gave up the idea to become immortal.

Ganesha used his tusk to write Mahabharata. Ved vyas would dictate and he would write. Ganesha agreed to write the epic only if Vyas would recite it continuously. Parvati told Ganesha to use his Buddhi while he writes the epic. This will ensure that the generations to come understand the true meaning of the epic. Some say he himself broke the tusk to write the epic as the iron needle that he was using was lost one day. It is interesting the he was perhaps the first stenographer of the world. This is a reason why he is also called ek dant.

Ganesha was the second son of his parents. His elder brother was Kartik. When they both were of marriageable age their parents were confused as they could not decide who should be married off first. Parvati and Shiva told them that they will have to go around the world. Any one of the two who finishes the journey fast will be married first.

Both the brothers had a lot of sibling rivalry. Kartik’s vahana was peacock so he could definitely be faster than Ganesha whose vahana was a rat. Ganesha as always considered being intelligent, he used his Buddhi and he went around his parents. He said that to him his parents were equal to the whole world. Both his mother and father were very pleased with this gesture so they got him married to the daughters of Viswaroopan named Riddhi and Siddhi. In many idols of Ganesha they both can be seen on his either sides. The famous temple of Siddhi Vinayak in Mumbai too has a similar idol.

Ganesha had promised his mother that we would never leave her unlike her other children and he did keep his promise. Ganesha’s vehicle or vahana is a rat. Well there are many stories that are associated with this. Some say Shiva made rat his vahana. Some say Ganesha was a very naughty kid and he was very dependent on his mother. He would always keep Parvati at her toes. As he was youngest child of all was much pampered. Lord Shiva gave him the rat as a vehicle as rats are very mischievous by nature so Ganesha would play with the rat and not disturb Parvati much.

Some say that there was a musician god named Krauncha. In the court of Indra, Krauncha by mistake stepped on the foot of muni vamadeva. The muni cursed him and he became a huge rat. He started to destroy anything that came on its way. Lord Ganesha ordered the rat that it will hence forth be his vahana.

The significance of rat is the fact that rats can destroy anything that come on their way this is exactly why Ganesha uses rat as a vahana. As Ganesha is the god of destroying all obstacles and problems. Rats are pests that destroy grains and other items. Lord Ganesha using rat as a vahana proves that Ganesha as the god of removing hurdles have control over this common pest too. This makes the faith of his followers even stronger.

Another interesting fact is that Tulsi leaves is never offered to lord Ganesha as Tulsi had cursed him that he will get married against his wishes. If you have Ganesha at home then do remember that you should never offer Tulsi to him. Ganesha loved to eat. Sweets were his personal favourite. Modak a special type of stuffed sweet is a must offering for the elephant god. As a result he was always very obese and had a huge trunk.

This gave him quite a complex to his brother Kartik who was always very handsome and athletic. Kuber who is the god of wealth often mocked lord Shiva as he lived a very simple life. Kuber invited Shiva to his kingdom Alakhpuri. He said that he will feed them so much that they will not be able to eat all of it. Shiva sent Ganpati instead. Ganesha ate all that Kuber gave him and wanted more food. Kuber realised his fault and asked for forgiveness.

He once stopped Ravana from becoming all powerful. Ravana worshipped Shiva and got a shiv ling from him that if placed in Lanka would make it impossible for anyone to destroy Lanka. Lord Ganesha (dressed as a shepherd) took the Shiv ling from Ravana and placed it in Gokarna. This proved to be very beneficial to the whole world.

There are many more stories that are associated with this interesting god. We could list only a few of them in here. These will help you to understand how important lord Ganesha is to the world and why he is given so much importance in all our religious ceremonies. He has indeed from time to time saved the world from many hazards. There are many followers of this lord in India. He is perhaps the most commonly worshipped lord in our households. The idol of Ganesha is placed in cars. Most artefacts and paintings do depict this interesting god in some form or the other. Ganpati bappa moray!

Take Lord Ganesha Quiz to know how much you have learned!!!