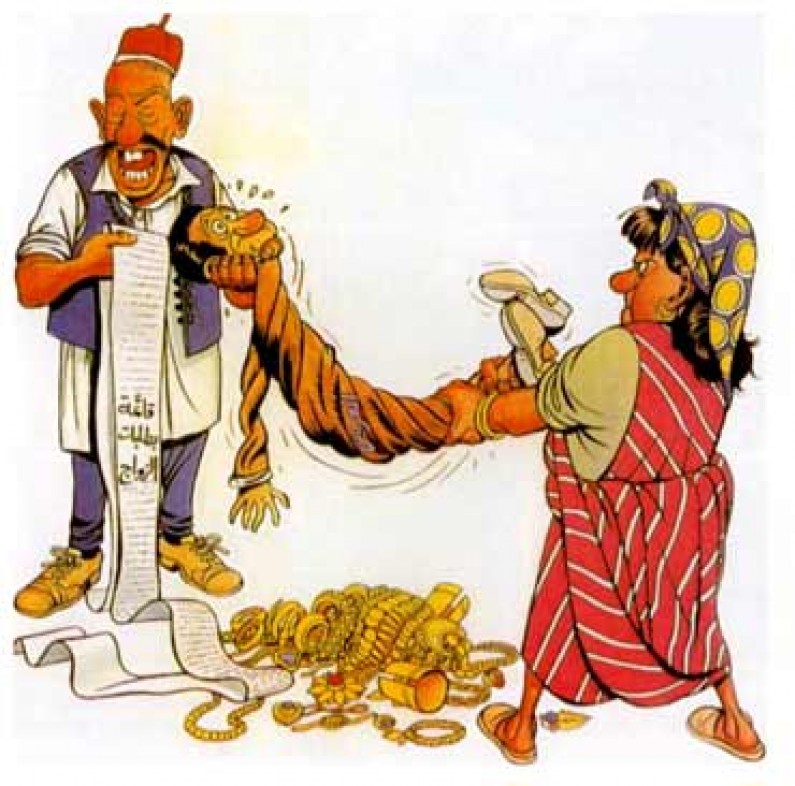 Dahej refers to the dowry that the family of the girls give to the family of the boys. Unfortunately the dowry system is quite prevalent and common across India today. However, it is interesting to know how it exactly originated and evolved with years. In the traditional India it was also called the “Handa”. It was derived from the word Hundi meaning pot. This clearly proves that dowry was given to the boy’s family in a pot. This means that the pot would be sufficient enough. Today the demand for dowry has gone much beyond what a pot can contain. Security For The Girl

Some say that the dahej was given as a security to the girl by her family. In those days after marriage there would hardly be any contact between the parents and their daughter. This is exactly why they would give this gift to their daughter to ensure that she has a secured future. The “Handa” was given at the time of kanyadaan itself. It was given in the presence of family and friends to ensure that everyone were witness to this. The rich families would give more handas and the poor ones would give only one that might not be full either.

It is clearly mentioned that dowry was never the criteria for weddings in Indian society. It was always considered as a gift that the parents give the girl. In those days girls were not educated and they had no security. If their husbands would ill treat them or throw them out of the house there was hardly anything that they could do. This is exactly why the parents secured their future with this small gift. The girls could keep this money with them and use it for their own needs.

From Dahej To Dowry System

As time moved on the concept of dahej took a different turn all together. The groom’s family started to make demands that they need so much wealth from the girl’s family else they will not let the marriage happen. Many parents who had more than one girl would live in tension that how they will get the entire dowry for the weeding. This dowry demands slowly started to damage the society in very deep levels. Parents started to pray that they should not have a girl child. The society where girls were considered laksmi and worshipped slowly became anti women.

The Menace of Dowry

Some parents who were rich could afford to have a few girl children but the poor started to kill the girls. That was the only option left to them. They could not get their girls married as the dowry demands were high. These women would have only one option and that was to join a brothel as getting a husband was not a possibility. The male and female ratio in India started to deteriorate. The Britishers had some good rules for Dowry. They tried to abolish the whole custom. They also tried to educate women so that they could live a respectable life and select the man they wanted as husband. This did help and dowry did reduce to a great extent but this happened only in cities.

After independence the government of India also made some good rules on dowry system. They made dowry harassment punishable by law. Every year many women become victim to dowry deaths all across India. Parents are forced to pay huge dowry to get a proper husband for their daughters. The figures are alarming. It is strange that how a custom to secure the future of the daughters became the cause of their agony and death.

Many women today protest against this dowry system. The first thing that must be done to stop dowry is to educate the women and let them know what their rights are. The dowry system is very deep rooted in the society.  It is so deep that many do not even consider it as a crime. We hope that this brief article on Origin of Dahej will help you to understand how and why dahej started in India.