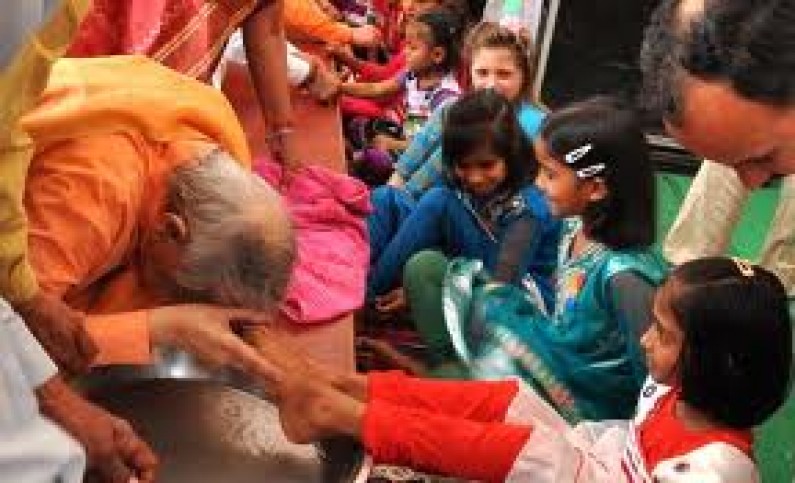 Kumari pujan as the name suggests is the tradition in which girls in their pre-puberty age are worshiped as a reflection of divine energy. The word Kumari is a derivative of Sanskrit word Kaumarya which means a virgin. The belief is that as soon as the girl reaches puberty the divine forces leave the body. We are not trying to justify if the tradition is wrong or right. The word is also used for referring to Goddess Durga in her childhood. Unmarried young girls are worshiped as Goddess Durga during kumari pujan or kanjak puja.

A short video encouraging you to perform Kanjak Poojan

Let us first start with the history of the Kumari pujan. Although being very popular in Bengal and Nepal, it is a tradition that is practiced all over India. Irrespective of the fact where a Hindu is found in the world, they observe Kumari Pujan in one form or the other.

Kumari Pujan has been discussed in the ancient scriptures. It is said that the Goddess Chandi declared that she is manifest in all females in the universe and the entire set of rituals celebrates this spirit. As a part of the rituals a girl is chosen as a kumari, a divine being.

In certain scriptures a young girl is worshiped till the age of sixteen while much lower in others. Different names are subscribed for a young girl depending on her age. Given below are some terms for different age groups of young girls.

1. Sandhya is used for a one year old

2. Sarasvati for a two year old

3. Tridhmurti for a three year old

4. Kalika for a four year old

5. Subhaga for a five year old

7. Malini for a seven year old

8. Kubjika for a eight year old

9. Kaalasandarbha for a nine year old

10. Aparajita for a ten year old

11. Rudrani for a eleven year old

12. Bhairavi for a twelve year old

13. Mahalaxmi in her thirteenth year

14. Pithanayika for a fourteen year old

15. Kshetragya for a fifteen year old

16. Ambika for a sixteen year old

The names are usually used while rendering puja and not otherwise.

The Why behind Kumari Pujan/Kanjak Puja: Traditional Perspective

Durga is considered to be the feminine aspect or mother of the universe (something similar to Yin of Chinese philosophy) as a result she is present in all that we see around us. So we can worship Her as She is present in all animate and inanimate objects.

Now that you know the essence of the Kumari pujan we will discuss the procedure for the same.  The first step is to select the girl who will be the Devi in the Kumari pujan. This is a challenge as getting a child who will have the patience to sit for so long can be a little difficult.

The girls selected for Kumari pujan are mostly between six to ten years. The Bengalis consider the Durga puja incomplete if Kumari pujan is not done on Ashtami or Navami. You can also see the Kumari pujan in various Ramakrishna missions across the world. Belur math in Kolkata is also famous for its Kumari pujan. In Belur Math Swami Vivekananda performed Kumari pujan in the year 1902. A Young Girl Getting Ready for Puja

The child is made to wake up early in the morning of Ashtami. She is given bath in Ganga water. The little girl is dressed in a traditional traditional sari of West Bengal and completely made up like a Goddess.

She is made to wear jewelry and flowers. Kumkum and chandan is used to decorate her face. Alta that is a red paint that Bengalis apply on feet and hands is applied on the hands and feet of the little girl. Once she is ready she is made to sit in front of the idol of Goddess Durga.

A flower from the hand of the goddess is taken and is given to the child to hold. Now all the items that are used for the puja of the goddess are placed in front of the child. On this day the child is considered to be the goddess and is worshiped. The priest starts chanting the mantra. The dhak (drums used in Durga puja) starts to play. It is said that at least once during Puja Goddess Durga enters the body of the child. Offerings made to the little child are considered to be offerings to the Goddess. Social degeneration motivated by the political and economic atmosphere led to degenration of status of women in Indian society. With time there developed an attitude that a girl child is a burden.

In total contrast to this Kumari pujan as mentioned in the scriptures shows the real position that women have in the social and religious world.  Kumari Pujan recognizes the potential divinity in all humans and specially women that must be recognised and respected is the main aim.

The Kumari pujan happens in a particular time in Ashtami tithi. The puja lasts for a few hours. The child after the Kumari pujan is made to bless the devotees. People ensure that they touch the feet of the child and get blessed. Giving gifts to this child is also considered very good and auspicious. You will often see a huge line of devotees in the pandal on Ashtami to get blessed by the Kumari who was worshipped on that day.

Some people may feel that it is a torture for the child.  Some parents may consider is a problem while some may feel honored that their child was selected for the Kumari pujan. It is indeed an auspicious and proud occasion for the family.

There are definitely two thoughts to Kumari pujan. Some support it and some are against it. The tradition is old and it is highly accepted by all across the world. This is exactly why Kumari pujan will continue in Durga puja.

Kumari Pujan can surely be promoted as a tradition that can help create and interest and respect for the fairer sex in the society!!