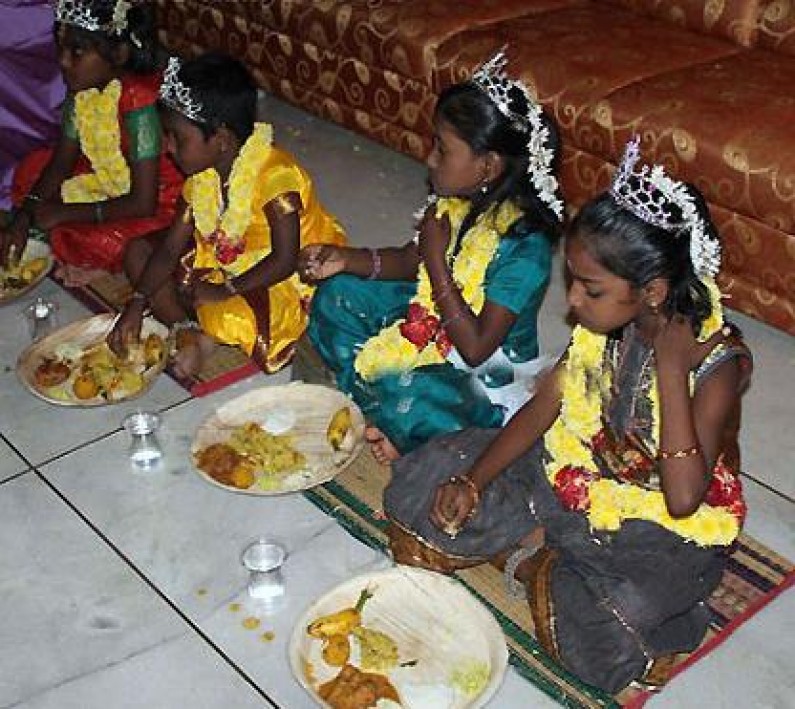 Apart from several other occasions described previously in our articles such as Sri Laxmi Pooja, there is a major occasion when the feminine aspect of Divinity is worshiped with full devotion in nine different forms, hence the term Navratri as Nav means Nine in Hindi language. Navratri vrat vidhi is a custom that many people across the country follow. We will discuss all the details that you need to remember and know if you are planning to do the Navratri vrat vidhi.

There are four types of Navratris which are celebrated in India

Sharad Navratris are the most popular celebrated nearly across the entire country before the festival of Dussehra.

Chaitra Navratris which are celebrated around first quarter of the year. These Navratris are starting from 28 March 2017 till 5 April 2017.

The nine devis are worshipped like in the other navratris and these Navratris end with birth of Lord Rama and hence they are also known as Rama Navratris. The worship vidhi of both these navratris are more or less the same although the customs vary locally but a generally speaking the Devi forms can be worshiped in the similar manner.

Although there is plenty time for Sharad Navratris, you can read about it since you are already reading about Chaitra navratris and increase your knowledge. Later on you can bookmark this article to be used during Sharad navratris once again and we will add even more info by that time. This year in 2016 the Navratri will start on 21 September 2017 and end on 29 September 2017. The Navratri vrat vidhi is followed mostly in the northern states of India. In the Eastern parts of the country the Navratri is considered as Durga puja and these days are meant for feasting by the Bengalis. In south, dolls are decorated in the houses on these nine days of the Navratri. You might also be interested to read this detailed article on Diwali poojan vidhi describing the entire parts of the country.

Navratri is celebrated to remember how Goddess Durga defeated the Asuras and ensured that the world becomes more peaceful and prosperous. On the ninth day goddess Durga actually succeeded in killing all the demons. Apart from Goddess Durga these days are dedicated to the worship of Goddess Saraswati and Goddess Laksmi.

The Navratri vrat vidhi is not very difficult. The person doing the Navratri vrat vidhi must keep fast in these nine days. He or she must have complete control on their food, behaviour and character. The food consumed in Navratri must be essentially fruits, curd, potatoes, etc. You must ensure that you do not consume any food that contains garlic and onion. These nine days you must worship the Goddess Durga with full dedication and commitment. Before the Navratri vrat vidhi starts ensure that your house is clean. The Goddess Durga will not enter a house that is not clean enough.

On the first day of the Navratri get mud from a pond that is located in an auspicious place. If you collect the mud from the bed of the river Ganga then it would be the best. Make a small bed of this mud. This must be made in the puja room of the house. Take some barley seeds and place on the clay bed. On this bed place a pot that is either made of mud or copper.

Fill this pot with water. The pot must be completely full. On top of this pot place a small bowl that is filled with rice. Keep a coconut with five mango leaves on this kalash. This kalash is considered to be the Goddess Durga herself. With full devotion welcome the Goddess Durga and tell her to come into the pot that you have placed. Place a diya near this pot and let it be lighted all through the nine days. It is called the akhand diya.

This pot with all its contents must be kept as it is for the rest of the Navratri. On the last day of Navratri you will notice that the barley seeds have sprouted and seedlings are coming out. These are pulled out and are considered as blessings from the goddess herself. These must be distributed among the devotees. There is a popular belief that the longer the saplings are the more prosperous the household will become in the next one year.

The first three days of the Navratri vrat vidhi are dedicated to Goddess Durga. Durga is worshipped for strength and energy.

From the fourth to the sixth day the Goddess Laksmi is worshipped for wealth and prosperity. We have also carried a separate article on Sri Laxmi Pooja vidhi and mantras for financial prosperty and material success, though we always keep adding that doing the right karma and hard work must go hand in hand with it.

The seventh day of the Navratri vrat vidhi is for the Goddess Saraswati. She is the goddess of knowledge and education. Without knowledge one cannot hold wealth for long. This is exactly why the goddess of education is also worshipped.

The eighth day of the Navratri vrat vidhi is called the Mahaashtami. On this day kumari puja is done. Little girls who have not attained puberty yet are worshipped like a goddess. This is done both in the temples as well as in the households. It is believed that these little girls get divine power on this day and they can bless the devotees and fulfil all their wishes. The devotees touch the feet of this young girl and ask for her blessings. The Daily Connection: the author would also like to point out that though the pooja is more associated with inner faith and belief, many of the outward acts were devised to lead common people towards a more spiritual life thus leading the way from religion to spirituality. Just for example, the act of cleaning the house and the surroundings would make one more organized and a better sense of discipline.

Similarly the concept of worshipping minor girls basically meant to place them at a revered place in the society and to inculcate respect for girls and females in the society. I just wish these message is driven strongly in this modern age when crime against women are rife. So we can see that the ancient sages and seers combined high level knowledge and the common acts in a manner which could be taught to people very easily.

Some people ask what is the relation between karma, destiny and will power and if any of these is supreme and whether knowledge, wealth etc can be attained by worshipping.These people do not understand that true pooja is a form of highest karma but if only done with the right will, faith and understanding. There is an interesting article describing this confusion of karma, will and destiny at our website.