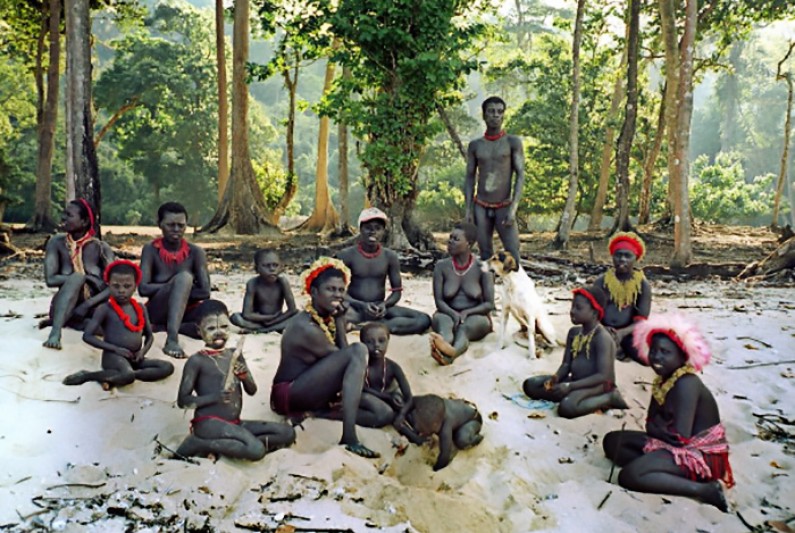 Jarwas are the natives of Andaman and Nicobar Islands. They have been protected by the Indian government. It is said that these are the original people of this island and they have refused to get in touch with the modern civilization. They want to continue in the life that they are in.

They are considered to be the adivasi group of people. It is believed that only 200 to 400 of these people are alive today and they continue to live in isolation in the dense forests of Andaman. Andaman has been an island for years. There are more than 500 islands in Andaman. It made it very easy for the tribal of this island to live a life of complete seclusion. They continued to follow their ancient ways of life until the Britishers landed on the islands. The Britishers established their famous Cellular jail here and since then the tribes of the island have suffered in more than one way.

Very often we get to hear about this tribe and also come across many stories that have been associated with them. The Britishers were the first to discover these native people. They tried to reduce the population by exposing them to alcohol and opium. After independence of India they were allowed to live in peace as they did not want to leave their way of life.

The Jarwas still use weapons like bows and arrows for hunting. In each village there are five to six houses and the population is not more than 20 to 25 people. The Jarwars become independent at the age of eight and it is considered that at such young age they can actually take care of themselves. They are allowed to marry as soon as they reach puberty. They follow monogamy. However, the widows and widowers are allowed to marry again.

Food of Jarwas: Not cannibals

They mostly eat fruits, vegetables, fish and animals that they get in the forest. They are not exposed to the modern ways and methods of cooking. The Jarwas stay naked. They wear some ornaments. These ornaments beautify their hands, necks and ankles but not the nakedness. However, now they have started to wear some clothes that are passed on to them by the visitors. They worship the natural things for example the sun, water, earth, sky and clouds. They do not have any religion.

Girls of the community are kept in complete seclusion during the time when they are having periods. After that they are supposed to take bath and then come back to the village. The elderly women of the community help with the birth of the child. Till the child is born no celebrations are done. When the child is born it is celebrated by clapping hands. The baby is massaged with the fat of monitor lizard. The Jarwas also believe in contraceptives. Natural resources are used for contraceptive. These are leaves of plants that are found in Andamans.

The Trubk road was made in Andamans and it passes through the Jarwas settlement. This road has led to a lot of problems for the Jarwa community. The tourists who come to these islands want to see these people as so much is told about them. Many private tour operators take the tourists to the houses of these people. The tourists interact with these people and give them gifts. These interactions have led to the spread of many diseases in the community. The government has told the tour operators not to take the tourists to these parts of the forests.

Long time no c outside world

These islands have been home to the Jarwas for the last 55,000 years. They are today out numbered by the many other people who have started to live in the island but still it is the home of these ancient tribes. The exploitation of the Jarwas was met with a lot of anger from across the world.

The Jarwas are the most protected and most isolated people you can find on Earth and they must be allowed to live the life that they chose to. There are more tribal in Andaman namely the great Andaman, Jangil, Jarwa, Onge and Sentinelese.

The great Andamans is the biggest tribe that lived in Andamans. They had a number of sub tribes called the Bea, Bo, Jeru, Juwoi, Pucikwar, Kede, Kol, Kora, Cari and Bale. They were more than 50,000 in numbers when the British first landed in these islands. Today hardly 50 of this tribe are left.

The tourists try to see them and this is not taken well by the community. They feel that the privacy of these people is at stake. The Jarwas live an interesting life and they do not want to be boteher by the modern society. Many human right activists from time to time have pointed out to the fact that the community has been exploited and assaulted.

The forests are filled with poachers and traffickers. The men from the outside community are taken to the huts of the Jarwas. The men under the influence of alcohol attack these women and force themselves on them. These men stay in the huts of these girls. In one such report it was seen that 8 girls from the Jarwa community had gone missing.

These reports have often been given to the government of India and they were forced to take actions against all the dangers that the Jarwas were facing. Apart from the Jarwas there are many more such native communities in the island and they all need to be protected from all the dangers.

We hope that the government will take some strict actions against all those who are causing trouble for this community that has been living in these islands for thousands years. Few days back there was a report that the body of a white boy was found near the Jarwa settlement. It is expected that the community killed the child as it belonged to a father outside the community.

Such incidents are a clear alarm that something strong must be done to protect the original people of this beautiful island. Similarly there have been many videos where the police and the forest officers are forcing the tribals to dance and in return food is offered to them. All these atrocities and recordings have not gone well with human activists and those who are working hard to protect the tribals across the world.

The government of India is trying the best they can. The task is not easy as controlling what is happening in such remote places is quite difficult. The biggest problem is the trunk road that passes through the heart of the Jarwa settlement and this just cannot be removed.