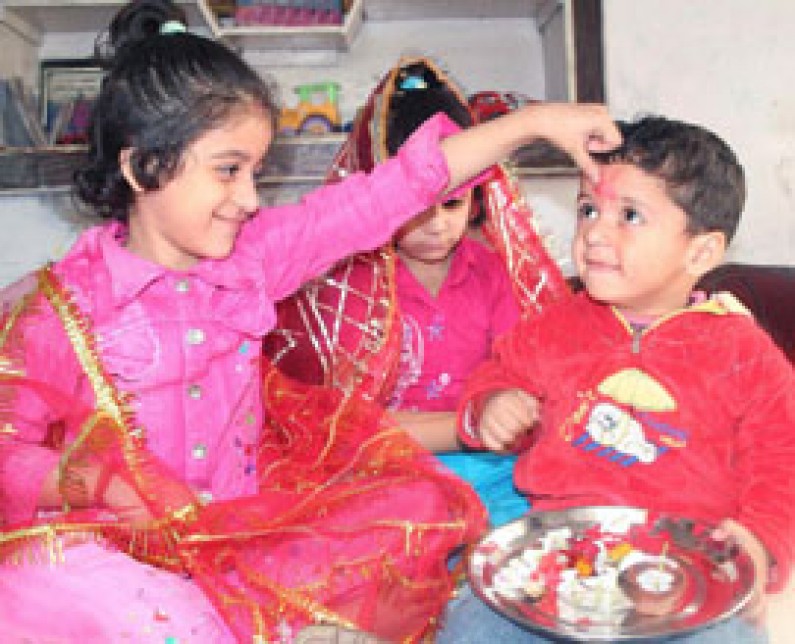 Before going into the details of Bhai Dooj let us find out some background information about the same. Modernization has brought many side effects and one of these is the degradation of relationships between human beings and especially the opposite genders. Yet the ancient traditions had very lofty benchmarks and some of these have bee symbolized in the form of a pious loving relationship between a male and female symbolized by festivals such as Rakhree and Bhaidooj so let us find out about the Bhaidooj festival and its significance.

The brothers and sisters wake up early in the morning and wear new clothes. The sisters decorate a plate with the kumkum for Tilak. A diya must be placed on the plate along with some agarbatti. You can also place sweets on the thali.

Some parts of India roli (red thread) and coconut are also placed on the plate. First the puja of the gods is done in the puja room of the house. The puja is done to request the Gods to bless the brother with a longer and healthy life.

After the ceremony is over the sister prepares a feast for the brother. Mostly the favourite food of the brother is prepared. In some parts the sister feeds the brothers. The Bhai Dooj is a grand celebration in many parts of the country.

In West Bengal the traditions are more or less the same. However, coconut is not used instead dubba (grass) is used to put on the head of the brother if he is younger as a blessing.

If the sister is elder then the brother places this grass at her feet and seeks her blessings. In West Bengal instead of Kumkum chandan is used to do the Tilak. Both white and red sandal wood is used for this purpose. The Bengali women also place the thumb near the lamp and place the warmth of the lamp on the forehead of the brother.

You just need to take the warmth of the lamp and not burn your finger. While applying the sandal wood Tilak the Bengali women say these lines three times “ I am applying Bhai phota to my brother lika Yamuna applies to her brother Lord Yama. I pray that my brother has a long and healthy life”

If the brother and sister cannot meet on Bhai Dooj then the sister can use the wall of the house to apply the Tilak assuming it to be the forehead of the brother. This ensures that the sister prays for the long and happy life of her brother.

If you turn the pages of mythology you will find that the Bhai Dooj has been given immense importance in the ancient culture and traditions. It is considered to be a very powerful tradition that makes the relationship of brothers and sisters stronger.

We hope that this article on Bhai Dooj 2013 will help you to understand the essence of the festival and celebrate it as per the actual traditions. Happy Bhai Dooj to all our readers!