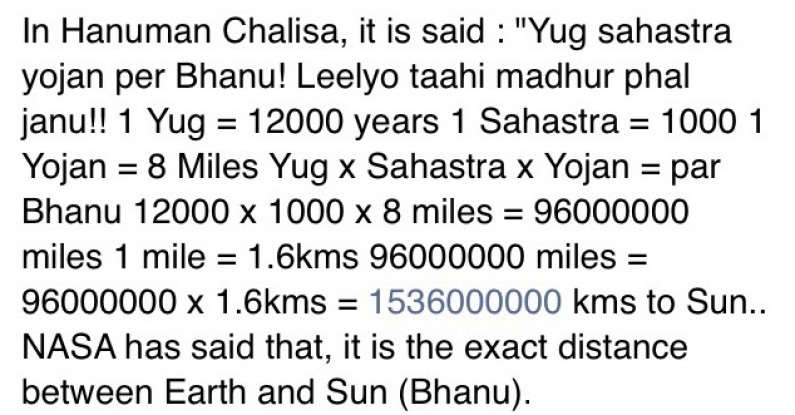 For those who have studied the ancient texts in depth, it is not a surprise that these ancient texts, when supposedly science and technology were not much advanced and human race was savage, hold truths which even the modern day science has difficulty in comprehending. But for the uninitiated they simply consider such things as hearsay or mere coincidence.

Yet we just keep presenting interesting information and leave it to the discretion of the viewers to make out its meaning. Given below is a calculation which shows the distance between Surya or Bhanu and the Earth. Those of you who know Sri Hanuman Challisa ji would know this verse. For others we recommend reading this post first on Sri Hanuman Challisa Ji.

One thing is sure though we are just comparing it with Rocket Science, it is very simple. Even otherwise the ancient texts and principles do not need approval from science for they were put forth by mind scientists, namely Rishees, who were greater than the scientists of today. Of course we do fully respect science and people involved in research but only mean to say that at some places faith is more important than intellect. Though this does not mean at all to encourage superstition or blind faith.