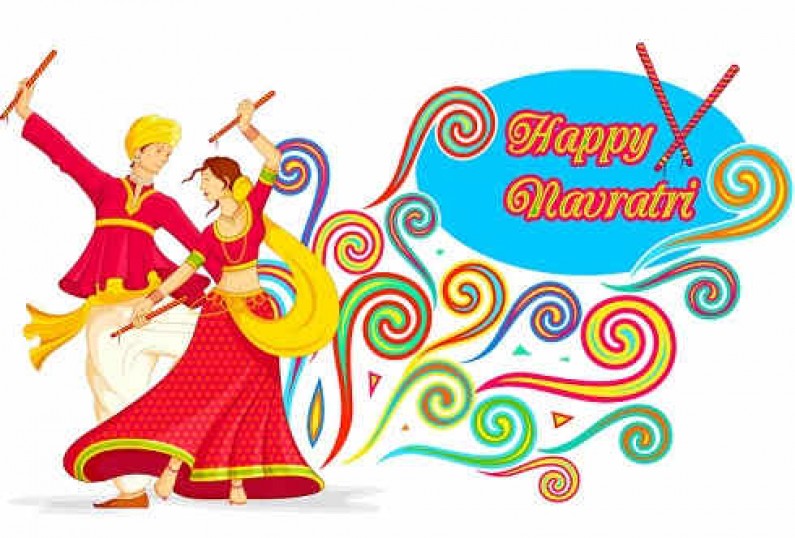 We in this article will try to understand why and how Dandiya is performed during Navratri. Navratri is the festival of nine nights when goddess Durga is worshipped in different parts of the country. India is a land where different cultures come together. Dandiya is a part of the culture of Gujrat and Rajastan, primarily the Western part of the country. Goddesss Durga is the epitome of power and is worshipped so that she can bless the devotees with the ability to fight against the evil. During the nine nights on each night goddess Durga is worshipped in her nine different forms. This year navratri is from 10th October to 18th October. The festival that is celebrated for nine nights.

The dance that is performed during the Navratri is called the Garba. It originated in Gujrat. Nowadays the dance that is performed more often and is more popular is called the dandiya. Dandiya is performed with colourful sticks. No sticks are used in Garba. If you translate the word Garba into Sanskrit it means the womb. A stage is prepared at the middle of a huge ground and on this stage an earthen pot is placed. A lamp is placed inside the pot and it is called the garba. Around this pot everyone dances and does the dandiya. Sometimes instead of the pot a picture or the statue of the goddess Durga is kept. Men and women perform around this garba. There is no restriction for age or cast. It is mandatory that all those who are performing the garba must not wear any footwear. This is because it is believed that the goddess visits the ground during the garba. She gives people power to fight the challenges that they face in life and all the evil forces. Goddess Durga also fought evil with her power and saved Dharma. Garba is nothing but a way of worshipping the goddess and asking for her blessings. Many people do the garba all through the night. People dance all night during the navratri and sleep during the day. Many people keep a very strict fast and do not drink even water during these days. In Gujrat the people are supposed to follow a strict vegetarian diet during these days. Music is played during the dance. However, for some time the music is stopped and during that time you can only hear the claps and the sounds of the steps nothing else. In the beginning the aarti is done and after that the dance starts. Anyone who performs the best dance is given a prize. The prizes are huge. Garba and Dandiya are also done during weddings as it has become an integral part of Guajarati culture.

Generally people think dndiya and garba is the same. It is not so they both are very different. Dandiya was associated with Krishna and Graba with the Durga. As there is a similarity between the two styles of dancing people combined the two and what we see today is a very different form of dance. Even today in Gujrat garba is done only using the hands and sticks are used only for a while during the dance. It is not sure why and when both the dance forms got mixed but it is belived that it was done just to ensure that the dance becomes more interesting and stays draws young crowd.

It is said that in the olden days Garba was performed with swords to signify the battle that goddess Durga fought with the asuras and glorify the power of the goddess. She finally defeated the demons on the ninth night and after that the evil stopped. She was since then regarded as the goddess and the protector of all. As time moved on swords were removed and only hands were used. Garba is the folk dance of Gujrat and is a symbol of its vibrant culture. Today it is performed for fun all over the country but it holds its roots in Gujrat.

The dance is performed in circle that signifies the cycle of birth, death and rebirth. The only thing that remains unchanged is the goddess Durga and her power that is why she is kept in the middle always. The circular movements are very similar to Sufi dance. Some dancers who are very skilled can also stack many pots on their heads as they do the garba and ensure that the pots do not fall. What is interesting is that people from various social and economic backgrounds come together as they perform the garba. There is no difference in the eyes of the goddess for what the cast and the economic position of her devotee actually is. All lives will have to finally blend with the supreme power of the mother goddess Durga.

It is very nice to see garba being performed and all the colourful attires that people wear during the dance. It is interesting to know that many international universities and colleges across the world celebrate dandiya and garba. They also have competitions arranged. It can be said that the garba has become an identity of India’s culture across the world. It must be the students from India who have taken this tradition of India to these universities. We hope that people try to understand the true significance of garba and respect the tradition. We wish a very happy and prosperous navratri to the readers. Maybe its not a tradition for you to do garba, but do try to dance and see how it feels and enjoy the eternal rhythm of garba. It can really make you feel as a part of the supreme power and enhance your spiritual experience.