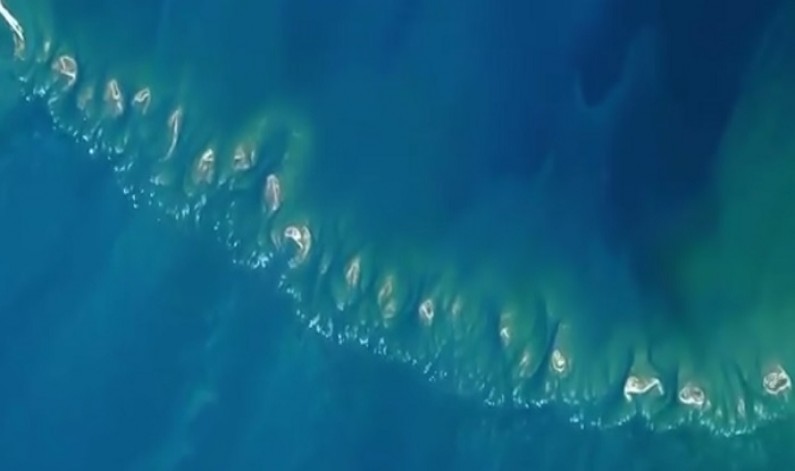 Ram Setu also known by different names. Some call it the Adam’s bridge and some call it the Palk Strait. It has been a topic of discussion and debate for years. The discussion starts from the point that whether the Palk Strait is natural or it is manmade. If we look at the Ram Setu today it is nothing but a causeway between the Pamban island of Tamil Nadu and Mannar island of Lanka. This causeway is called Adam’s bridge because there is a peak in Sri Lanka called the Adam’s peak it is believed that Adam had fallen on this peak from heavens and later he took the causeway to reach the other continents. Interesting! But all are stories and there is no solid proof to all this.

This bridge is indeed an interesting example of how man and nature have been working together for years. Let’s try to understand some more points about this interesting causeway known as the “Ram Setu”. In the Ice age there was a land connection between India and Lanka that is what many scientists believe. Some also feel that this causeway might be remains of that land connection itself. Another belief is that Sri Lanka was at some point of time a part of the Indian sub continent and was separated by some volcanic activity as a result a causeway was created naturally.

As per Hindu mythology this causeway or rather a bridge was built by Lord Rama. This is why it is called the Ram Setu. Why did Lord Rama build this bridge? Lord Rama is considered to be one of the incarnations of Lord Vishnu. He was born around 6000 to 7000 years back. His wife was abducted by the powerful king of Sri Lanka called Ravan. The name of his wife was devi Sita. Devi Sita was kept captive and Lord Rama had to reach Sri Lanka to get her. There was no way to reach Sri Lanka as there was a vast sea to cross. That is exactly why Lord Rama along with his army constructed the bridge that we know as Ram Setu. The army of Lord Rama consisted mainly of monkeys and was called the VanarSena. After reaching Lanka,  Lord Rama fought a long and a very difficult battle with Ravan.

Eventually Lord Rama won and came back to India using the same Ram Setu. He later detroyed the Ram Setu himself, as per the scriptures. Maybe that is why there are only remains of this Ram Setu today and nothing much. As Ram Setu was destroyed people slowly forgot about it. Only a few years back it was prominently visible in a picture taken by a satellite sent by NASA. This  again made it a topic of discussion and debate for all.

Mythology has indeed come up with an interesting episode of how this bridge was made. However, science cannot believe in this theory. This is why the debate and discussion has been so prolonged with no specific results yet. A carbon analysis of the bridge was done and it dates back to 5000 BCE (exactly the same time of Lord Rama).

The causeway is so prominent that eve today you can see it from outer space as a bridge that connects the two countries. Many say that the bridge was above the sea level years ago. Roughly the length of the bridge would be around 30 kms. That is a long distance for making a bridge over sea. Now most of it is submerged under the water. Even around 15th century the bridge was above the sea level and people could walk on it and commute between the two countries. The depth of the water near the causeway ranges from 3 feet to 30 feet. The causeway is so prominent that that water is very shallow at many spots; this is why the ships cannot take this route even today. The ships that are traveling from India to Sri Lanka have to take another route.

So far we saw what the mythology have to say about the construction of this very inserting causeway. Now let’s look at the point of view of science. According to the scientists who have studied this causeway there is an absolutely different theory. There is a linear sequence of coral reefs in this area that gives an impression of a bridge or a causeway. Primarily the causeway is caused by limestone.

Few years back a proposal was made to construct a man made bridge on the same place where the Ram Setu exists. The ambitious project was called “SetuSamudram project”.  However, this project was not allowed to take off as many were against the idea. The religious groups said that Ram Setu is religiously significant and as a result no man made construction should be allowed on it. The environmentalists were also against it because construction of a bridge would mean vast damages to the coral reefs in this part of the sea. These corals have been there for thousands of years and must not be destroyed by a man made bridge. This could also have a very bad impact on the aquatic life under the sea.

Ram Setu is indeed a mystery that eludes us for years. A perfect example of man verses nature or maybe an example of man and nature can work together. It is tough to say how exactly this bridge came into existence. It was first made and then these stories started to revolve around it? Or it is true that this bridge was constructed by Lord Rama to rescue his wife. Can a manmade structure survive for so many years, that too in deep sea? Even if we look at it from nature’s point of view, it is difficult to believe that a long formation of reef can survive for so many years. Maybe it is an example of how man and nature together created something and ensured that it stays protected for generations to get inspired.