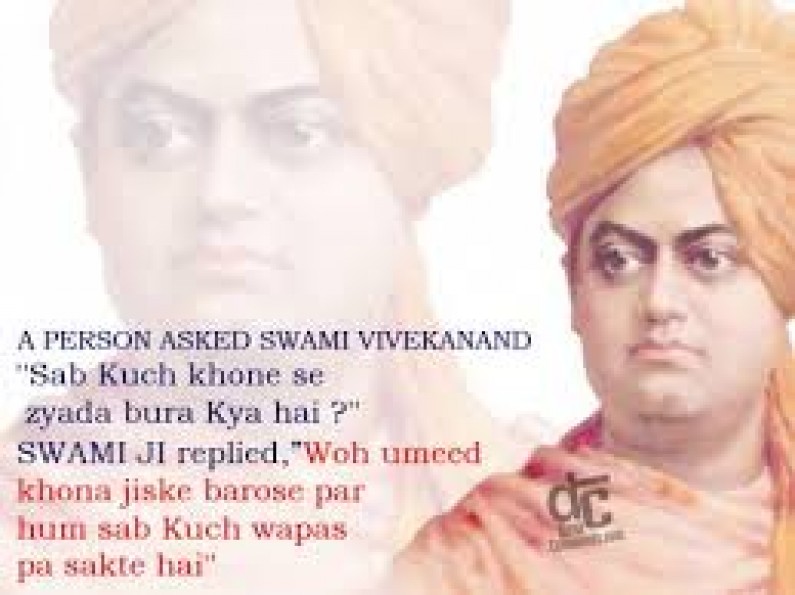 Swami Vivekananda was born as Narendra Nath Datta in an affluent Bengali family. A great disciple of Swami Ramakrishna Parmahansa he played an instrumental role in introducing the Vedic philosophy to the western world. He revived Hinduism and took it a place where it earned the status of major religion. Once again I mention my grandmother here for even before we read about Swami Vivekananda in our school books she had introduced us to him through bed time stories. There is a lot that one can write about this great personality and his philosophy, but today I will be sharing one of the stories that Biji often narrated.

The story holds relevance even today and in everyone’s life. The story tells about how to be fearless. One morning when Swamiji was in Sarnath he happened to visit Maa Durga’s temple. He got cornered by a troop of monkeys. On one side of Swamiji was a large water tank while on the other a high wall. Every time Swamiji tried crossing the troop they would not allow him. They would howl and shriek. They marched close to him and Swamiji began to run. The faster he ran more ferociously the monkeys chased him. They became bold and even tried biting him. It seemed impossible to escape!

Suddenly Swamiji heard a sanyasi’s voice call out to him. The sanyasi asked him to face the brutes. The thoughts brought Swamiji to his senses. He realized that the monkeys will keep following him till he keeps running. He stopped and stood to face the monkeys. As he did so, the monkeys retreated and fled! We enjoyed the story every time it was narrated. As children what we understood was that we should be bold and face difficulties but as a 40 something adult there is much more to gain from the story.  Our negative thoughts are like monkeys and till we keep running from them, these keep chasing us. As long as we give negative thoughts power over us, we become irate and insecure. It is battle in which we have to determine who is stronger – the monkeys or us. Doesn’t this hold true for all of us?

We pay counselors and psychologists for a lesson that Swami Vivekananda left for us so effortlessly. The only way to deal with our fears and insecurities is to face them, to be bold and confront them. My personal take on this is you cannot stop feeling the fear. It is all about moving on inspite of everything and the consequences.

Here is a short poem about fearlessness which is a tribute to the Great Saint on this day !!!

All fear is just in your mind and in your psyche

Yet at the base of everything, terror it will strike

Worst than 26/11, worse than Charlie Hebdo is such fear

It cannot be matched by any situation, listen o dear

Rise above fear, realize that nothing can bring your harm

In all situations and circumstances, just retain your charm

Else you will be slave in this world, always dying each hour

Even the sweetest of things will but just taste sour

So remember irrespective of whom you are, what you do or where

To face your worst fears, always just be ready and prepare

Once you face them, they will no longer exist

But will vanish like with the sun, disappears the mist

Once we do it, see how our life takes a brand new turn