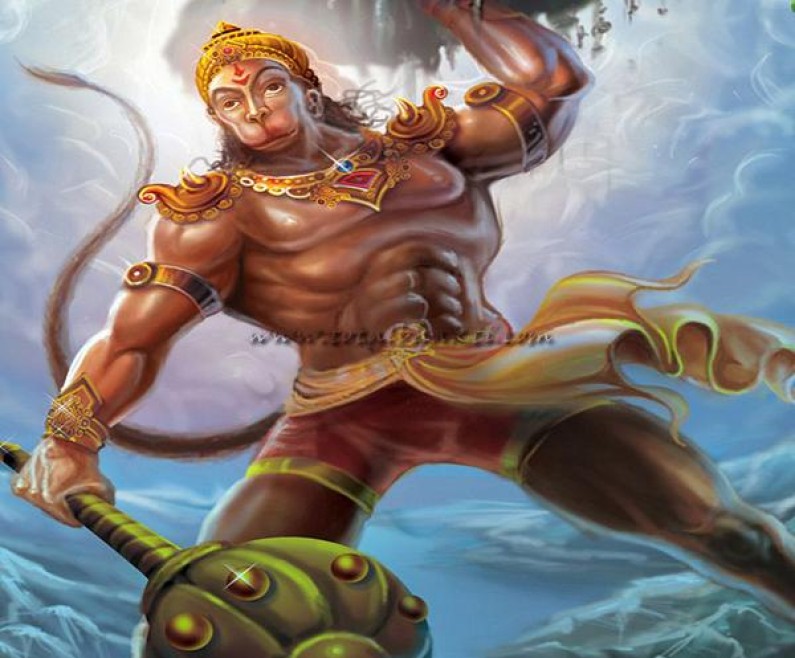 Date of Lord Hanuman Jayanthi in 2020

Every year Hanuman Jayanti is celebrated in India. It is the day when Lord Hanuman was born. As per Hindu calendar it is the purnima in chaitra month. In the coming year this jayanthi falls on 8 April 2020. We all know the basics about Lord Hanuman but before we go into his worship vidhi, let us recall a bit. Also known as Bajrang Bali, Lord Hanuman was the son of the wind God.

He was very strong and was a great devotee of Lord Rama. He helped lord Rama defeat the king of Lanka Ravan and get back Goddess Sita. His mention is there in the Ramayana.

For years people have been worshiping him all over India. Hanuman was born to vanaras. Vanaras were a type of creatures on earth that looked like monkeys. His mother was Anjana who was actually an apsara. She was cursed and was born as vanara.

Her husband was Kesari. They both prayed to Lord Shiva for a child. Lord Shiva was pleased and Hanuman was born. Vayu or wind god is like the father figure for Hanuman.

Many say that Hanuman was lord Shiva himself. Lord Hanuman was very strong. He was as swift as the wind. There are many childhood stories of the Hanuman that do the rounds. It is said that he would play with the sun. He fought with Rahu as a child. This is why many people worship lord Hanuman to stay away from the ill effects of Rahu.

Blessings From All Gods

Lord of the wind Vayu dev had blessed him with a boon that he can never be harmed by water.

The God of fire Agni blessed Hanuman with the power that no fire can cause him any harm.

The Sun God blessed Hanuman with the power to become the biggest and the smallest in size.

The Lord of Sex Kamdev blessed Hanuman that he will never get affected by sexual desires so he will remain a Brahmachari.

Education and other qualities

He was taught by the Sun God who taught him all the knowledge that he had. It is believed that Lord Hanuman was one among those who saw lord Krishna tell Bhagwad Gita in the vishwaroop state.

Lord hanuman was a great devotee of Lord Rama. He had promised Lord Rama that he will live on earth as long as people took the name of Rama. This is exactly why Goddess Sita blessed him that his idol will be placed in all public places. This will ensure that he can hear people chanting the name of Lord Rama.

Interesting that Lord Hanuman is considered immortal in Hindu mythology. He is said to be alive even today and that is why He is also known as cheeranjeev or the one who lives forever.

When you visit any town or village in India you will find many idols of Lord Hanuman. They are mostly orange in colour. It is said that lord Hanuman is the only God who can help to get rid of evil spirits. Many people worship the Lord Hanuman to get blessed and to get free from evil spirits.

It is said that Lord Hanuman can remove all hurdles. People often pray to Lord Hanuman before they start a journey. You will find small idols of Hanuman in vehicles and cars. This is mainly because lord Hanuman can protect people from all trouble.

Women are not allowed to touch the idol of Lord Hanuman. They can enter the temple and pray but they cannot touch the idol as he was a Brahmachari. Many modern feminists think that this is not equality with the female gender, but let us tell you that it is merely a symbolic ritual which mainly signifies that both genders (men and women) have an inherent desire which can only be overcome with great will power, meditation and Prayers and till that time, it is best to avoid too much contact with each other.

We have also published an article on the benefits of celibacy. Apart from this there is no such anti-feminism in this practice and the Lord Hanuman Himself gave equal perhaps more respect to the wife of Sri Rama than anyone else.

Here is the audio for benefit of our readers

Then  you need to offer flower now you should chant:

After this you must offer dhoop and chant:

While lighting the lamp infront of Lord Hanuman you must say:

At the end you should offer gud laddus to the Lord and chant:

This is the shortest and the most convenient way to please Lord Hanuman and offer a pooja. You can do this puja at your home or you can also go to a Lord Hanuman temple.

Many of our readers have been putting for constant requests to put the above mantras in English. Actually we cannot translate them per-say into English but will give a brief description so that after known the meaning you can just recite the above mantras which are written in English alphabets itself

“Aum shree Ramdut Hanumate Namah” basically means that we offer our salutions to Lord Hanumana who is the messenger of Lord Rama. Samarpayami means offering so we are offering several things to the Lord in above lines such as flowers, sindoor and so on. Basically this is a form of devotional bhakti or bhakti yoga which is one of the types of yoga or a method in which one can unite with the Divine.

Days of the Lord

Although there is no day when you cannot worship Lord Hanuman, still tuesdays and saturdays are specifically dedicated as the days of Lord Hanuman. If the puja of Lord Hanuman is done on Saturday it can protect you from all evil and trouble in life. Some say that Lord Hanuman is pleased with love and devotion. If any devotee worships him with all heart they will get blessed. You can also chant the name of Ram Naam or

for as many times as you can in a day. Lord Hanuman is also associated with Goddess Kaali. This is exactly why when you offer prayer to Goddess Kaali you are indirectly praying to Lord Hanuman too. You can also fast on this day. It is better if you worship Lord Hanuman in red clothes. Red flowers and kumkum are offered to the lord.

Although the name of Lord Hanuman delivers from all fears, still some specific mantras you can recite are as follows

and another one is