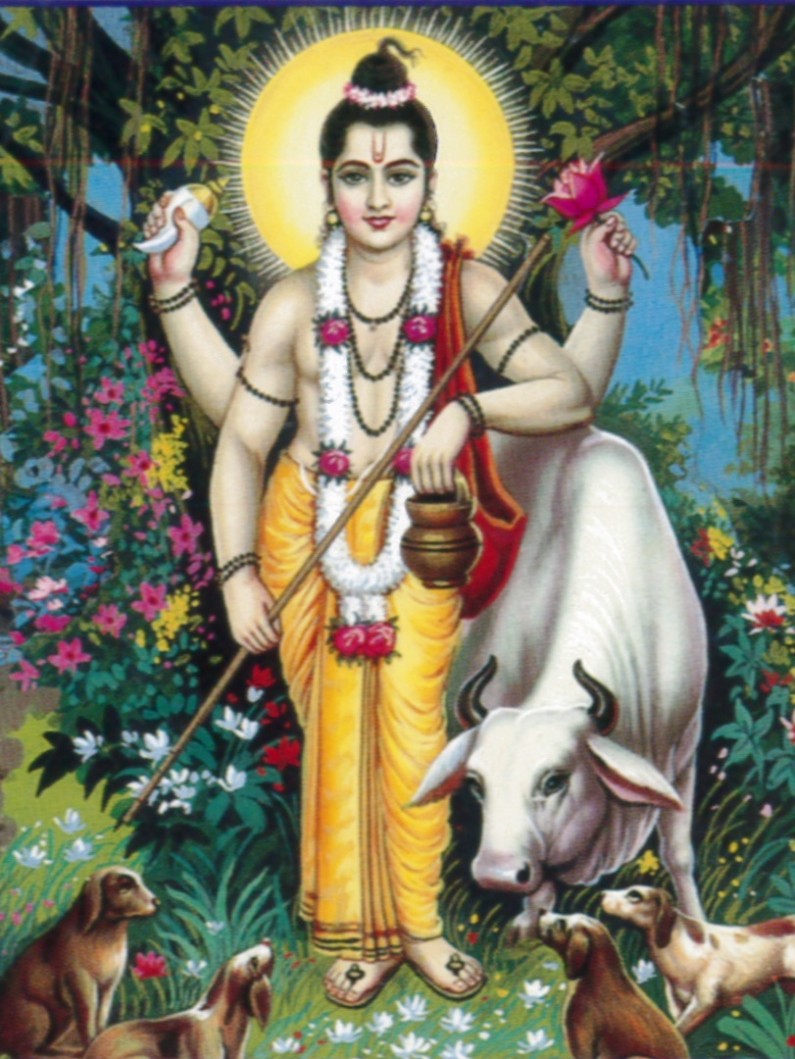 India is a spiritual nation and specifically ancient India had a lot of great saints and deities which are still a source of inspiration to the society. One of these ancient great souls goes by the name of Lord Dattatreya.

In this article we will discuss who is Lord Dattatreya and his legend. I must clear one thing at this point for people not much aware of Indian traditions that a Saint is never mentioned in past tense as its believed that even after the demise of their physical form and being done with their last rites, these great souls still remain in non-physical form and available to any devotee. Of course this has nothing to do with ghosts or spirits but this article has a different theme and we will discuss that in some separate article.

The popular belief is that Lord Dattatreya was a combination of Lord Shiva, Brahma and Vishnu. He was the supreme power himself. From an early age itself Lord Dattatreya would wander in the woods naked. He wanted to search the absolute.

Scriptures say that Lord Dattatreya was a very powerful saint and he was a talented yogi. He travelled all across India performing miracles. Even today there are lots of his devotees all across the country. It is said that in one of the peaks of Girnar even today the foot print of Lord Dattatreya can be spotted.

Many temples have been constructed all over the country to worship Lord Dattatreya. Most of the idols that you see today of Lord Dattatreya have three heads and three pairs of hands. Well these are latest additions that were made in the last thousand years. The Lord Dattatreya was born like any normal man with one head and two arms.

Sometimes a Gada is also placed in his hands. Well the original beliefs were that Lord Dattatreya was the supreme God himself.  This is exactly why these idols were shaped like this to represent the same.

Lord Dattatreya could take any form and he could be present anywhere. He was a great saint and had a huge number of followers. Lord Dattatreya is one of the most ancient saints as he is mentioned in Upanishads, Atharva Veda, in Ramayana and even in Mahabharata. This shows how integral he was to the Indian culture and traditions.

Lord Dattatreya is often showed being followed by four dogs. These four dogs represent the four Vedas. In ancient India dogs were believed to be very sacred. They are animals that can be wild as well as domesticated at the same time. This is exactly why the dogs were considered as the symbol of faithfulness and devotion.

Lord Dattatreya would always be surrounded by these dogs. The Lord Dattatreya also has a cow standing behind him. This cow is called the Kamdhenu. This was a mystical cow that could fulfill any wish  The devotees say that the Kamdhenu cow fulfills their desires.

Lord Dattatreya taught that all religions were the same and they led to the same goal. This is exactly why he gave equal importance to all religious beliefs. He said that truth was biggest religion of all. Anyone who wants to live a true life can follow Him.

Lord Dattatreya said the mother or Shakti who created the universe must be always worshiped. He basically taught his followers to worship women and respect them. Giving up “I” factor is the supreme of all sacrifice.

Lord Dattatreya also taught his followers that the biggest gift is to give youself. He taught everyone to be self-less. Only when you can give up yourself can you attain moksha. If you want to get close to God you will have to forget about yourself.

Even today the birthday of Lord Dattatreya is celebrated as Datta Jayanti. It is said that Lord Dattatreya still exists on earth. He can take any form so we cannot recognise him but he is very much present. He is called Trimurti. His name means Datta (the giver) and Atreya means sage.

Lord Dattatreya knew yoga. This is exactly why he told all his followers that anyone can learn yoga with a little hard work and efforts. The yoga makes one’s body stronger and mind powerful. It is just a change in outlook that is needed in order to learn yoga. All that one has to do in concentrate more within than what is going on outside. The teachings of Lord Dattatreya are very strong and are still followed.

I hope by reading this article you have got a good idea on who is Lord Dattatreya. He was a great saint of ancient India. He was considered to be the Avatar of the God himself. The miracles that he performed make him popular even today. He is worshiped all across India even till date. You can locate temples of Lord Dattatreya all over the country.