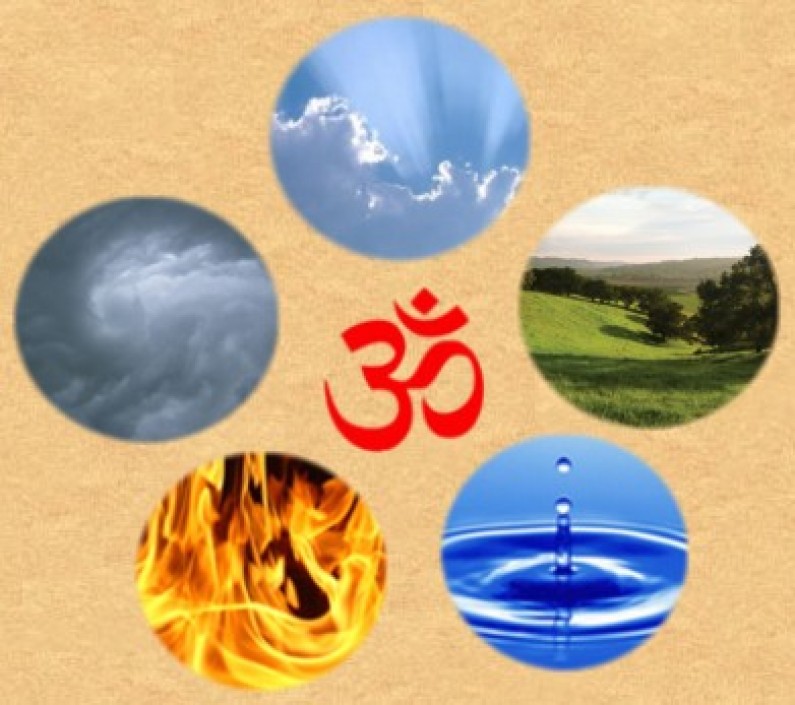 Those of us who have studied science even at very basic level know that it classifies matter into elements like atoms (along with further subdivisions) which compose all living and non living things in the universe. The Five Elements of Nature

Similarly the five elements described in the ancient texts basically are a nomenclature for a similar classification which was done as a result of extensive research by the seers. These five elements are those that we are made up of and the entire universe as well and these are the elements that we will end. They are the reality of life and they must be a part of every aspect of our life.

Names of The 5 Elements

The actual names of the these elements and their approximate English translation is as follows:

Actually it must be noted that though the English translation of these words is related to objects of common knowledge and experience like say fire, in actual this does not mean that Agni represents actual fire (same holds true for other elements too) but it only means that it is the concept related to heat energy (something like say thermodynamics).

A common factor which runs through these elements is their permanence as they are beyond the touch of change and since they form the very basic building blocks of universe (of which humans are also a part). Infact the ancient seers tried beautifully to combine this higher knowledge into the everyday lives of the common people of the yore by incorporating these concepts in simple ritualistic manner as part of prayers or puja. The whole idea was to present the information in a manner which was understood by a layman and also that people got reminded of these concepts and it got carried over from generation to generation in form of rituals and customs.

Even while doing most prayers or pujas, it was mandatory to have a symbolic representation of these elements in the puja thali. When you see the puja thali you will find that all these five elements are present in there. Jal in the form of Ganges water is present in the thali. Fire in the form of the lamp is there in the thali always. Air will be the smoke that comes from the incense stick that you light. Chandan is placed in the puja thali as representative of earth and ether is also present to symbolise akash. It is strange that we do not know the simple traditions that we follow daily. A deeper study into these traditions will make us realise how strong and powerful the culture of seemingly simple ancient people was and we must appreciate its value.

Earth or Prithvi is the first of the five elements. We can touch and feel the earth element and it is further subdivided into two parts. One that we can see is called nitya and the other that we cannot see is called the anitya. The part that we can see is like the human body that is perishable. The one that we cannot see is the imperishable part like the soul which never dies. We will like to share some features of this element so that you can relate to the same better:

The second element is jal it refers to the element which resembles the properties like that of water, and also can be seen and felt. It changes form from liquid to gaseous state and represents the cycle that goes on in nature where water evaporates and comes back to earth in the form of rain and the smaller bodies of water combine into the bigger ocean. The properties of these element are as follows.

We move on to vayu, the third and one of the most significant of the five elements. Like the other two elements mentioned above even this element has a perishable and a non perishable part and can be best compared to air as we know it. You can feel the air when it blows or when there is a storm. The puranas mention that there are forty nine types of winds. Some of the important types of winds as per the purana are pravaha, avaha,udhava, samavaha, vivaha, pravaha, and paravaha. The wind that has the capacity to take water from the ocean is called the udhava. Some features of this element are:

Agni is the fourth element in the list of the five elements and can be most closely related to fire as we know it being associated with heat. It is again both perishable and also has a part that cannot be perished. Fire is one of the eight guardians that guard the universe. The fire has the south east position occupied in the universe. There are different fires like the fire of the earth, the fire of the sky, the fire of the stomach. It is also called the tejas and some features that will help you to understand this element better are:

The akash is the next in the list of the elements that we will be discussing now. It is the only element in the five elements that do not have a perishable half. It is the sky or the ether if compared to the most common thing we know around us. It is a carrier of sound energy and when you are into deep meditation you can hear the sounds of the akash.

Only those who have yogic powers can actually listen to the sound of the akash. It is this element that links the living souls to the ultimate Supreme Reality. It was AUM that was heard as the first sound and it is still embedded in this element. This is beyond all the five elements. Some features of this element are:

On reading the above table you might have noticed that some of the features are closely associated with common food items thats because we have tried to connect the basic unity this concept represents underlying the spiritual, the material and everything.

We hope that by reading this article you will get a strong idea of all the five elements are all about. They are all around us still we fail to know their true form. Perhaps next time you see these five elements you will have a whole different perspective of looking at them.