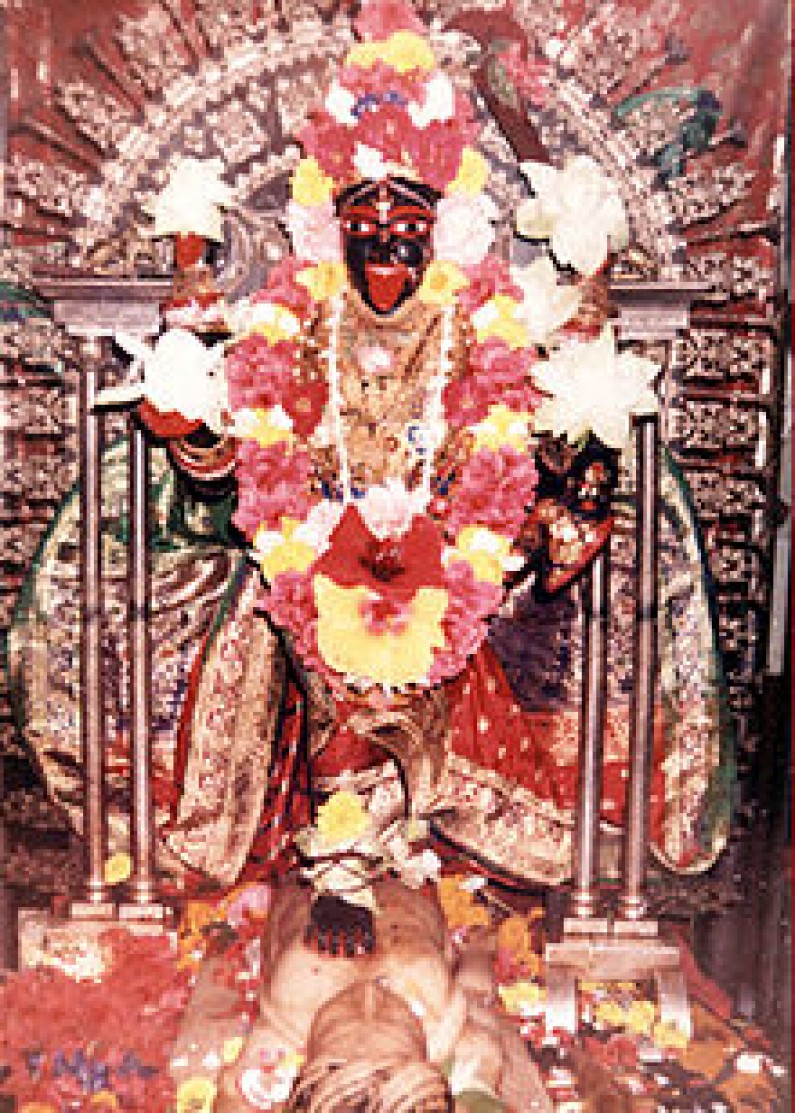 Perhaps it will not be wrong to say that this temple does represent the city of Joy. Located in the North of Calcutta the Dakhineshwar kali temple symbolises the city of joy and all its shades. Apart from being an integral part of the Bengali culture it is also a place of immense religious significance. We will now discuss how the spiritual travel in India is absolutely incomplete without a visit to the Dakhineshwar Kali temple. We will discuss how in this article now.

The temple is associated with Ramakrishna Paramhansa. He belived that all religion are the same and they lead us to the same goal these teachings made him very popular. Devotees from all walks of life would follow him. In the year 1847 the construction of this temple started beside the holy river of Ganga. It covers twenty five acres of land. The construction was over in 1855. The funding was done by Rani Rashmoni of Janbazar. It is said that Rani got a dream one night wherein the goddess Kali herself came and told her that she should make a temple in the banks of Ganges and worship her. She also said that she herself will be present in the temple as the goddess and accept the prayers. The Rani Rashmoni of Janbazar spent nine thousand rupees on making the temple. She invited one lakh Brahmins on the day the temple opened up. A year later she appointed the elder brother of Ramakrishna Paramhansa to do the puja in the temple. This is how Ramakrishna came to the temple. He spent all of his life in here teaching the devotees and performing miracles that are beyond imagination. On the first of January every year he would become Kalpataru and as a result he would full fill all the wishes of his devotees on this day. He was a learned man and his philosophies were followed by many including Vivekananda. It was Vivekananda who first introduced Hindu religion to the western world. Ramakrishna got enlightment in this temple. The Panchvati where he would meditate still exists in the temple complex. He know the art of tantra and worshipped goddess kali.

The temple is built on an ancient Muslim burial ground. It gives huge power and potential to do Tantra in this area. This makes the goddess more powerful and strong. The temple was a symbol of power. It was a challenge to the Britishers who were ruling India in those days. It is quite closely associated with the Indian freedom movement. Rani Rashmoni of Janbazar built this as a challenge to the Britishers who had made a rule that Indians could not practice their religion in groups. Apart from the main Kali temple there are twelve Shive temples, one Laksmi Narayan temple, one temple that is dedicated to Rani Rashmoni, and there is a special temple for Ramakrishna Paramhansa. Like all other Kali temples the idol of Kali is standing on lord Shiva’s chest. The body of lord Shiva is placed on a silver lotus that has one thousand petals on it.  There is also an idol of Maa shardha who was the wife of Ramakrishna Paramhansa.  She was married to him when she was five years old. She actively participated in all his teachings and activities.

The temple is an architectural beauty. It is one of the oldest temples in the country. It has been maintained exactly the way it was built. In spite of so many people coming to the temple it has not been commercialized. It still follows the old traditions and puja timings. There are CCTV cameras installed a places. Devotees are not allowed to carry phones and cameras inside the main temple. The temple and all its activities are maintained by a trust that is formed by some renowned members of the society. Every year a lot of people from all over the country come to visit this temple and offer prayers. The devotees have immense faith in the goddess kali here. It is said that she still resides in the temple and helps those who need her.

As said this temple is in the city of Calcutta. Calcutta is a metro and it is well connected to all cities across the world. You can reach Calcutta by train, bus or even by air. The temple is in North Calcutta so you can take a taxi and reach the temple. Anyone in Calcutta would know the way. If you want you can download a route map and reach the temple with a self drive car. You can take the metro too for reaching the temple. Bengali is the local language of Calcutta. However, you can manage in Hindi and English too. Calcutta is a little hot and humid in the summers and even rains are no better. We would suggest that ideally you visit the temple in the winters. Starting from November to February is a great time to be there.

Calcutta is the capital city of west Bengal so you can easily get a lot of hotels in here. You can book them in advance too if you want. Mostly the hotel is crowded and is busy through the year. We would suggest it is better if you book a hotel in advance. Three kilometres from the temple is the Belur math which is the head quarters of Ramakrishna mission. When in Calcutta you cannot just miss out the other splendours that the city of joy has to offer namely the Victoria Memorial hall, the Howrah bridge, the boat ride in the Ganges is a must and last but not the least the food of Calcutta. You must try out all these to make the feel of the city of joy complete. Without tasting the sweets of Calcutta your trip can never be complete.

In front of the temple you can get all that you might need to offer a puja. You might have wait a long time in queue as the temple has a lot of rush from devotees. You can offer Sindur and red and white bangles to the goddess. After the puja is done you will be given the prasad that you can take home. There are lot of poor people waiting outside the temple you can give them food and money. Some devotees take a dip in the holy water of Ganga and then offer prayers to the goddess. The timing of the temple is from 5:30 to 10:30 in the morning. In the evening the timing is from 4:30 to 7:30. This is exactly why you should plan your visit accordingly.

This should give you a good insight into the temple of Dakhineshwar and how you can reach there. What are the points that you must keep in mind before you take a trip to this spiritual temple is all mentioned in this article. I hope you will get a good help from it when you make a plan to visit this temple that symbolises the power of our religion and culture. I can guarantee you that few moments spent in this majestic temple located in the banks of the river Ganges can give you immense spiritual experience.