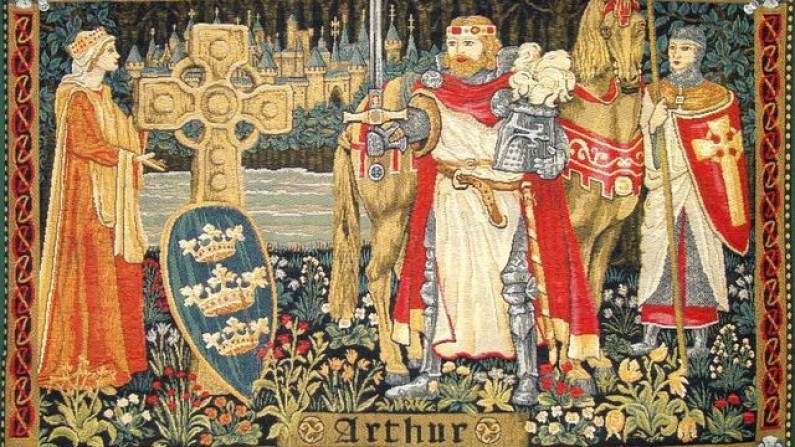 “The Arthurian legend” finds a mention in many facts and fictions of Great Britain. The legend started from 12th Century onwards and it still continues to bewilder the human mind. There is more than often a mention about typical superhuman type heroism in the ancient texts of Britain. For example we are enclosing a few lines that mention this heroism after the defeat of Saxon invaders at the hands of King Arthur.

The lines that describe this heroism are “He drew his sword Caliburn, called upon the name of the Blessed Virgin, and rushed forward at full speed into the thickest ranks of the enemy. Every man whom he struck, calling upon God as he did so, he killed at a single blow. He did not slacken his onslaught until he had dispatched four hundred and seventy men with his sword Caliburn. When the Britons saw this, they poured after him in close formation dealing death on every side….” These famous lines were written in the book named Geoffrey of Monmouth’s History of the king of Britain.

Let us try to understand how these stories started. It can be dated back to the 5th century. At that time Roman rule in Britain had collapsed and as a result invaders from Denmark and Germany were constantly attacking England. Historians believe that Arthur was a British warrior who was fighting these invaders. He would lead the Christians, Romanized and Celtic people against the Anglo-Saxon invaders.

It is quite possible that the historians and the writers of that time were inspired by Arthur and they wanted to project him as a larger than life figure in order to inspire the normal people of England to fight against these invaders and protect the mother land. He was made into a national figure and as a person who possessed qualities that were beyond a normal human being.

The aim was to ensure that the generations to come take pride in Arthur and use him as a role model. This part of England’s history was actually very depressing and gloomy. There was poverty all around and the country was dealing with a lot of foreign invasions. In such a gloomy atmosphere there was a serious need to come up with something that would keep the confidence and the moral of the countrymen high. It was needed that the glorious past of Britain continue to live in the hearts of the people and the writers felt that the only way they could do this was to create a living legend “Arthur”. It is not clear if Arthur was a human being who had such supernatural strengths or he was just a figment of imagination. No matter what sometimes it does happen that if you discuss a lot about a fictional character it becomes a living legend like it happened in this case. He was the national hero of Britain for a long time. The best part is he is perhaps the only national hero who perhaps never even existed.

The legend of Arthur is simply fascinating and it is highly interesting to understand how the bits and pieces of this character were built over the years. Like most of such cases even this topic is under a constant debate. Some feel that Arthur was a man and the others feel he was just a myth. Some say that no such person actually existed. Some say that he did exist but he was a normal person who was given the form of a superhero. There is also a group of people who constantly argue that Arthur was a reality and the Arthurian legend is a fact.

The first mention of Arthur

History always wants evidence. Unless you have something in writing you cannot claim that such an even actually occurred. If you look at the history of Britain the first timeArthurian legend was mentioned in early medieval copies by some monks. The first such writing dates back to a 6th century Latin work that was written by a monk named “Gildas”.

It was an inaccurate writing though because the monk mentions that the British defeated the Saxons and the Mount Badon was sieged. Here Gildas does not give any credit to any particular hero for the victory. He says that this ensured that there was no advancement of the Saxon’s army into England.

After this there was another mention of Arthur and that was in 10th century. In this mention an author named Welsh Annals mention that Arthur was very well connected to the Battle of Badon. It mentions that Arthur and Medraut perished. In these were originally taken from annals that the monks used to keep in the dark ages and were usually used to find the dates for the church feast days.

Some consider that these annals are a great method to study what happened in that era as they could be trusted easily. The starting points were however arbitrary as a result it is almost next to impossible to give accurate dates to these events.

As we are talking about the resources that mention about Arthur we have to mention “History of Britons” this is the third source that we will be discussing. It was compiled as early as in 800s in the North Wales by Nennius. It is nothing but a cleric translation of what was happening in Wales at that time.

Nennius refers to Arthur as “Britons’ dux bellorum” which also means “commander-in-chief” but not the king. This was the same battle that we have already mentioned earlier in the article where in the Mount Badon was seized. Nennius also mentions some eleven more battles where Arthur fought. Many historians who have studied the history of Britain in details do claim that most of the account that Nennius mentions seem to be correct historically.

Although most of the claims made by Nennius seem correct there are accounts where fantasy does seem to take over reality. For example Nennius says that the grave of Arthur’s son was changing in length each time Nennius saw it.

When Nennius was writing about Arthur a lot was already written about him. Many authors and poets who wrote about Arthur even before Nennius do tell that Arthur was a superhero and could not be defeated even by giants and witches. In the 10th century there was a poem that was written about Arthur and was titled “Spoils of Annwn” in this poem there were mentions of how Arthur was going to faraway lands looking for new adventures.

In one such trip he reached the land of the dead in search for the magic cauldron. It mentions the Holy Grail that is also mentioned in the Arthurian legend later. In the Cletic tales too you will find the mention of heroes like Llenlleawe and Gwalchmai. These characters have a deep resemblance with the Arthurian knights Gawain and Lancelot.

There is also a mention about the wife of Arthur in many writings of that time. His wife was a lady named Guinevere. The first reference to her was made in the Celtic form and was called Gwenhwyfar. However, the problem again is there is actually no solid proof to support the existence of a character like that.

The geographical limit of these tales that were written around Arthur did not remain confined to British Isles alone they went too far of lands that included France and Italy. There were many mention of Arthur in the paintings and writings of French and Italian origin. In the Modena cathedral one of the doorways actually featured the sculpture of Guinevere being rescued by Arthur, Kay and Gawain.

Some Medieval accounts about Arthur

The stories about Arthur and his adventures kept mesmerising the people of British Isles for a long time. It was in 12th century that the adventures of Arthur began to become more and more popular. In the year 1125 in an English chronicle named “William of Malmesbury” came up with an original account about Arthur who was by then a superhero of the nation. The hope was simple if an authenticate biography of Arthur could be created and if the original burial of Arthur could be traced then the legend of Arthur will definitely become more than just a fantasy.

In the year 1135 Geoffrey of Monmouth’s lively history of the Kings of Britain actually claimed that the account he gave about Arthur were nothing but facts. This account was later studied by other scholars and they all were of the opinion that the claims made were basically taken from the old Celtic legends and histories but the accounts were made more larger than life by the author. There was no evidence in the writing that could claim Arthur to be a reality.

Pictures make the best form of evidence and they can help us to decide better if the stories about King Arthur are true. One available image shows that Glastonbury Tor was rising above the fields of the North Somerset plain. The fact is that in the times of Arthur the hill was nothing but a peninsula skirted by a narrow sea and marsh. This area as often referred to as Avalon where Arthur was taken after he was wounded and he was left here to die. We are just trying to put together the historic and geographic facts against what was claimed in the Arthurian legend so that the readers themselves can decide if they should consider Arthur as a myth or a real man.

The 1542 John Leland who was also an antiquarian wrote “At South Cadbury Stand Camallate, sometime a famous town or castle.” This writing was basically based on an excavation that was done on the summit of South Cadbury Hill in Somerest. We have enclosed the picture. It was between the years 1965 to 1970. These excavations did bring to the notice of the world a settlement that belong to the dark ages and was definitely a wealthy one. Many experts believe that this could have been nothing but the Camelot of King Arthur. This discovery was definitely a solid piece of evidence that made the debate about the legend of Arthur even stronger.

Before we end, we will mention strong evidence that make us believe that Arthur was a reality and not a character from some fiction. The monks of Glastonbury Abbey strongly claim that they have found the bones of Guinevere and Arthur found buried near the Abbey Church’s Lady Chapel in the year 1191. These bones were later moved to a black marble tomb. We have included the picture of this spot here.

However, the tomb was destroyed and the bones were lost during the dissolution of the monasteries. So this again pushes us back to the same point was King Arthur a real character or he was just created by the authors of that time to inspire people to fight against the intruders.

These are just a part of what was written about Arthur. There is so much written about him that it is not possible to discuss all that in one article. We have just tried to collect what we thought was significant and could be used to support the discussion if Arthur and the legend about him is a reality or it is just a figment of imagination.