By Vedantacharya Bhatt on December 4, 2012 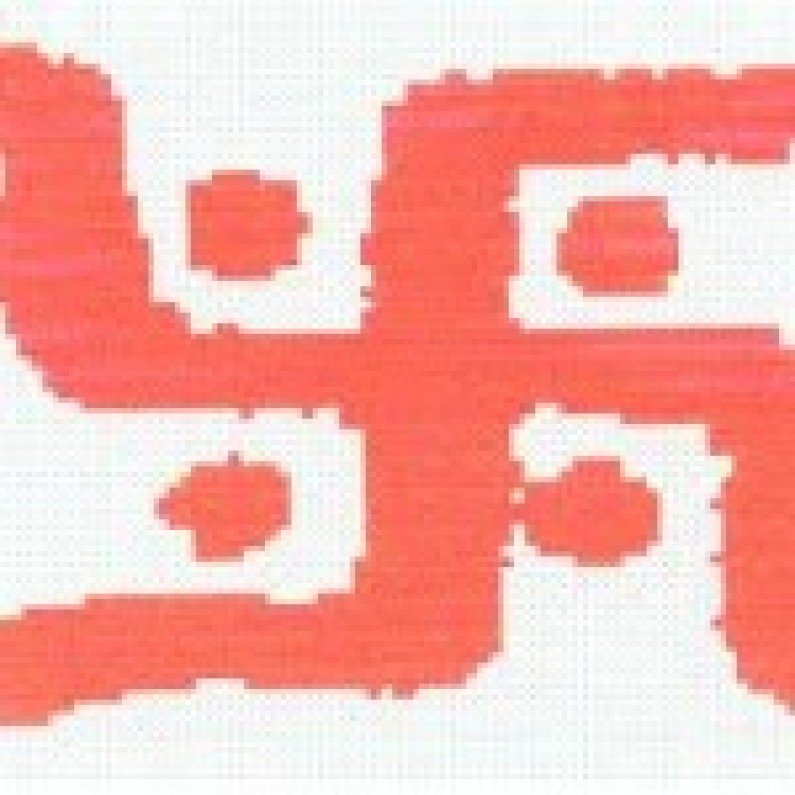 Do you know the meaning of Swastik Symbol? Swastik is a symbol that is invariably used in all Hindu rituals. The symbol is enclosed in this article too for your reference. It is impossible that you have not seen this symbol. It was also used by Hitler as a symbol of his rule and power. Well no matter where he got the idea form, it cannot be denied that the symbol is very Indian. The Sanskrit translation of Swastik means pure and auspicious.

It means that this symbol can make anything pure and remove impurities from it. It is a part of any puja that is done. It in simple term means all is well. It signifies good luck and fortune. A Swastik must be made before a puja commences. It is made either on the wall, on a pot or also on the floor where the puja is done. It is a cross basically with four arms that bend at right angle. Sometimes dots are made between the arms and sometimes they are not used. The symbol is also used to make lockets and bracelets as it is believed to bring good luck to the person using it.

Well if we go beyond the literal translation of the word and look more closely at the symbol. There is a very interesting aspect to this symbol. No matter from which angle or direction you look at it appears the same. This is one of the very few symbols that have this ability to look the same from all directions. This is exactly why it is considered to be the symbol of the sun. It is also belived to be one of the hundred and eight the symbols of lord Vishnu.

Some believe that as Brahma can see in all the four directions as he as four heads this symbol also represents Brahma. The cyclic nature of this symbol also signifies the cycle of life and death. In the vedas it is said that the life of a man is divided in four parts each spanning twenty five years. These four parts are namely Brahmacharya, Grihstha, Vanarprastha and Sannyasa. The Swastik symbol might represent these four parts of human life.

Even Native Americans considered it a symbol of the sun. Hindu’s believe so because just like the sun never fails to rise in the morning and set in the evening. The Swastik too never loses its form. It symbolises continuous progress and ability to never change. This is definitely true and also interesting to know how this symbol must have evolved. It indeed is a mark of continuous change and progress. The symbol is very geometric and is indeed well thought. Some also believe that the four arms of the Swastik signify the four vedas the very basis of Hindu religion.

It is interesting that this symbol can be traced back in time and also across many old cultures and religions that the world has seen. The symbol can be traced as back as three thousand years. Even in Egyptian civilization it was considered as an auspicious symbol. It has been found in artefacts that were found in Harappa and Mohenjo-Daro. They were even traced in Bronze Age coins that were found in England. In many Buddhist scriptures to this symbol is present. You will often see this symbol printed at the chest and at the feet of Buddha. This symbol is belived to contain the soul of Buddha himself. During the excavation of the Indus valley civilization many vessels and utensils were found with this symbol.

The Greeks associated this symbol with Apollo the sun god. The statue of Apollo that is placed in the historic museum of Vienne has a huge Swastik depicted on its chest. This definitely is a strong proof of the fact that this symbol has been in use in our culture for a long time now. However, the meaning of this symbol and the most prominent use of it is found in Hinduism only. There is no auspicious event that can happen without this symbol in a Hindu household. It is mostly made of sindoor. This is exactly why it is mostly red in colour. In the eastern parts of the country it is used but in a different form. However, the significance of it does remain the same. It is belived to bring power and Shakti to the house. It is used from birth till death in all ceremonies that signify life on earth. Making it one of the most important and indelible marks of Indian culture and civilization.

Each culture and faith had a different name for the same. For example in China it is called wan. In England it is commonly referred as fylfot. In Greek it is called Gammadion. So on and so forth in various other religions of the world have different names for this symbol. Perhaps it is indeed a powerful symbol that has the ability to bond all the religions and cultures of the world. This makes the symbol even more interesting and strong. However, in present day this symbol is very much used in Hinduism alone. You can spot this symbol on cars, shops, on temples, doorways and even on clothes. Even the followers of Jainism use this symbol a lot. It is one of their main symbols.

As the symbol more or less existed in all cultures from the beginning and in each faith it has been given a prominent position. It becomes even more difficult to trace its origins. However, the experts believe that it originated in Dwarka as that was the city of Lord Krishna. The city is now under the ocean after a massive earthquake destroyed it about five and a half thousand years ago. There is no documented proof however to support how this symbol came into existence. In other religion too there is no mention of how this symbol has come into existence. However, this is well known that the symbol had no association with the start of the universe and life on earth unlike the symbol of OM.

This symbol of purity was used by Hitler as a symbol of Nazis. This became a symbol of hate as many innocent people were killed by Hitler. He picked this symbol because he belived that like the Aryans conquered India he would be able to conquer the world with this symbol. According to him this symbol meant superiority and power. After world war two this symbol was banned by the western world as it reminded them of the horrors that Hitler had spread.

However, with time people have started appreciating the religious and cultural significance of the same. The western world has now accepted this symbol as a part of Hinduism and our faith. This is all the facts about the meaning of Swastik. It is an interesting symbol that has found mention in many civilizations across the world mainly because of its uniqueness. The symbol of Swastik is most commonly used in Hinduism after Om. Nevertheless, it is equally interesting to see how this symbol has been omnipresent in various cultures of the world. Maybe it’s time that we understand and appreciate the true meaning of the symbol and try to unite this divided world.