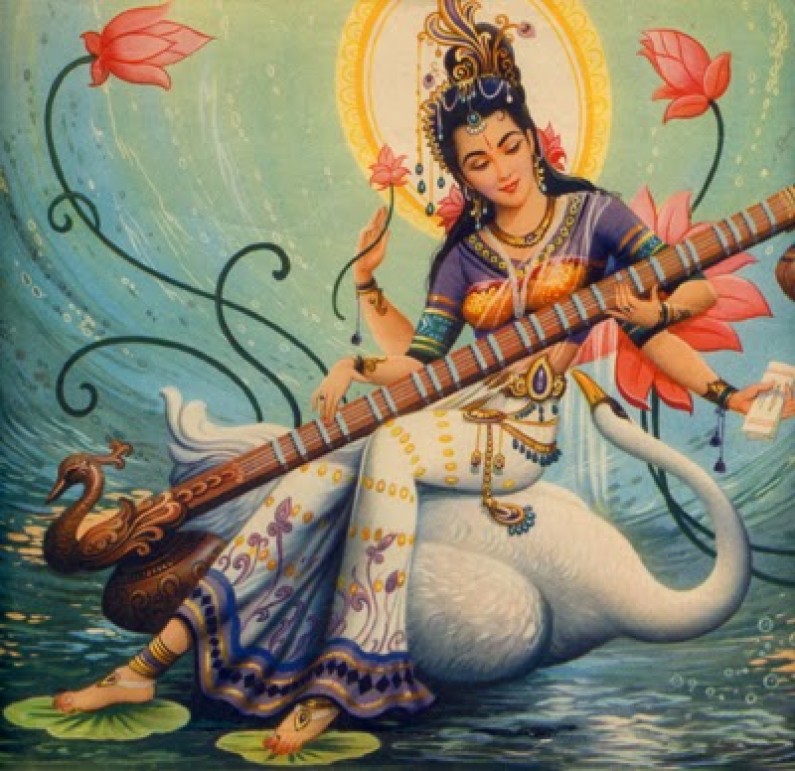 Saraswati is the goddess of education, art culture and music. The goddess is worshipped in many parts of the country. We in this article will discuss about the Saraswati Puja that is common in West Bengal and will also discuss the significance of this festival. The Saraswati Puja will be celebrated in 2018 on 22 January.

The actual pious timings are as follows:

The festival is celebrated usually on the day of vasant panchami. Vasant Panchami means the fifth day of spring. The exact date of the festival keeps changing every year as per the Hindu calendar. Apart from Bengalis this day is also celebrated by the Sikhs.

This day is celebrated as it initiates the spring festival. The colour that is associated with this festival is yellow. This colour is significant as during this time mustard flowers are blooming everywhere. People prefer to wear yellow clothes on this day as they worship the goddess. Even food items that are prepared on this day are generally yellow in colour. The food items that you will often see on this day are sweet saffron rice and yellow sweets.

The day is celebrated with puja and in some places cultural programs are also arranged. This day is considered as the birth day of goddess Saraswati. She is also considered as the wife of Brahma. In Punjab the Sikh community celebrates this day with a lot of devotion. On this day the musicians in gurudwaras perform the basant raga. In some parts of Punjab fairs are also arranged on this day. This is the day when Guru Govind Singh got married so it makes the day even more special. Even in Tamil Nadu this day is celebrated. It is the ninth day of the Navratri in Ashwin month. In Firozpur this day is celebrated with kite flying.

The Relation to Lord Kamadeva

If we look at traditions this festival was originally more dedicated to Kamadeva. Lord Shiva had turned Kamadeva into ashes. The wife of Kamadeva did a very tough penance for continuous forty days. At the end of these forty days lord Shiva felt pity and he gave Kamadeva his life back. This day was vasant Panchami and as a result this day started to gain importance. Dhol players and dancing girls would come to the royal palace and perform on this day. The songs that were sung on this day were dedicated to Lord Krishna and the gopis. Soon after the celebrations some gulal would be applied. The gulal was significant of the fact that Holi is approaching fast. This day is still considered as a good day for marriage in many parts of the country. A lot of marriages happen on this day.

Saraswati puja is a very important puja. If you please the Goddess Saraswati she can grant you with a lot of knowledge and talents. The people who are affected by Rahu must worship the goddess Saraswati regularly. She is the mother of the Vedas. Some say that she is the daughter of Lord Shiva and goddess Durga. There are many more theories about her origin. Some also say that she came out from the mouth of Lord Brahma. She was very beautiful and Brahma considered her as the most beautiful creation of his. She is associated with the moon and lotus both of which are signs of eternal womanhood.

Some theory also says that she came out of the Samudra manthan. As she was very beautiful and full of knowledge she was sent to heaven and stayed there as goddess. Some also say that goddess Saraswati was Vishnu’s wife. As she was too intelligent Vishnu decided to give her off to Brahma and since then she became the wife of Brahma.

No matter what story is said about her origin one thing is for sure that she is considered t o be the goddess of knowledge and wisdom. She has four hands that signify the ego, mind, intellect and alertness of the human beings. You will find her holding lotus in one hand this signifies true knowledge. She also holds the vedas in one hand and carries a veena (musical instrument).

The goddess is always dressed in a white coloured saree. It is said that with the veena she plays the music of love and life. The goddess is seen rising a big white swan. This swan signifies purity.

The Saraswati Puja is a big festival in Bengal. Most of the schools have holiday. The Saraswati Puja is celebrated in almost all the houses and educational institutes. People of all ages worship the goddess on this day. In Bengal there is a tradition that is called hatey khori (writing for the first time). This tradition is followed even today.

Small kids who are yet to learn how to write are a part of this tradition. On the day of Saraswati Puja many small kids sit infront of the goddess Saraswati in a queue. They are accompanied with an elder. They are made to write one or two alphabets of English or Bengali in a slate. The elders hold the tiny hands of the child and make them write these letters. It is considered an auspicious day to start writing. It is said that if a child writes his or her first alphabets in the presence of goddess Saraswati they will always be blessed by the goddess and will do well in their education.

The great poet and philosopher Kalidas was blessed by goddess Saraswati. It is said that he was a very foolish man and was married to a princess. When the princess realised that how foolish Kalidas actually was she left him. Kalidas was very upset and wanted to kill himself. Goddess Saraswati appeared to him and blessed him with immense knowledge. After that he became one of the most talented poets India had ever produced. He also became famous for his knowledge. This shows how powerful the blessing of goddess Saraswati can actually be.

The Saraswati Puja is an important festival. We hope that this article will help you to understand the importance of this festival better and will also help you to celebrate it with more devotion and dedication.