On August 3, 2017, our beloved sanghamata and president, Sri Mrinalini Mata, peacefully left this world for the eternal realm of bliss and freedom in Spirit. A guiding light of wisdom, love, and understanding for the hundreds of thousands of truth seekers whose lives have been transformed by the teachings of Paramahansa Yogananda, Sri Mrinalini Mata dedicated herself to serving the Guru’s spiritual and humanitarian work for more than seventy years. A pure exemplar of unconditional devotion and service to our Guru, and of profound attunement with his wisdom and ideals, this exalted soul illuminated the way for countless devotees worldwide to dwell always in the light and love of God.

Chosen and Trained by Paramahansa Yogananda

Sri Mrinalini Mata will be forever remembered as one of Paramahansaji’s foremost direct disciples. She was among the select group personally trained by him to carry on the work of Yogoda Satsanga Society of India /Self-Realization Fellowship after his passing, and became the fourth president of YSS/SRF in 2011. She succeeded Sri Daya Mata, who served in this role from 1955 until her passing in 2010. She also served as editor-in-chief of YSS/SRF publications, responsible for bringing to publication the teachings of Paramahansa Yogananda—a role for which she was trained by Paramahansaji himself and which she held until the end of her life. Prior to assuming the presidency, Mrinalini Mataji served as SRF vice president for forty-five years, closely assisting Sri Daya Mata in the overall guidance of the YSS/SRF monastic order and overseeing the numerous activities and services the society provides each year.

Imparting the Spiritual Light and Wisdom She Absorbed From the Guru

In every role in which she served the work of Gurudeva Paramahansa Yogananda, Mrinalini Mataji was guided by the divine wisdom of his teachings—which totally permeated her being—and her loyalty and utter trust in him. Because of the personal training she received from the Guru, she was ideally qualified to convey—to monastics and householder devotees alike—his precepts of spiritual living, his lofty standards, and at the same time the loving encouragement that he offered to all who were sincere in their search for God.

Many have drawn inspiration from the talks and writings in which she shared her experiences during her years with Gurudeva. She was also instrumental in organizing the monastic training program in Paramahansaji’s ashrams, giving to those entering ashram life a thorough grounding in his ideals, and passing on to them the training that she had received from him. 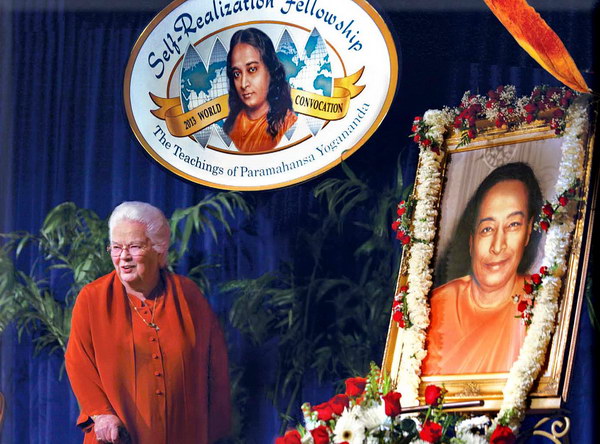 Many years ago, when she was still a teenager, Paramahansaji remarked to her: “Someday, you will have many, many to train.” Though she was understandably startled at the time (being very new on the path herself), thousands over the years have been blessed by the fulfillment of the Guru’s farseeing prophecy. To monastics and lay members alike, Mrinalini Mata imparted encouragement that patient striving—in one’s meditations and daily efforts to change oneself—is vital to spiritual progress, as is faith in God and Guru and in the soul’s divine potential. How often she inspired devotees to see that unlimited potential within themselves and to manifest it in their own lives.

She said: “No one but you has made you what you are at this moment. God did not interfere with what you were creating by your free will. And no other human being dictated what you are. You are today what you yourself have created by your right or wrong actions and thoughts and motives and desires. And if we have made our destiny, then we also have the power to change our destiny. Sri Yukteswarji said: ‘Everything in future will improve if you are making a spiritual effort now.’ If there is one point above all that I would impress on you, it is that point of conscious spiritual effort—the non-acceptance of any imperfection or limitation in your life.” 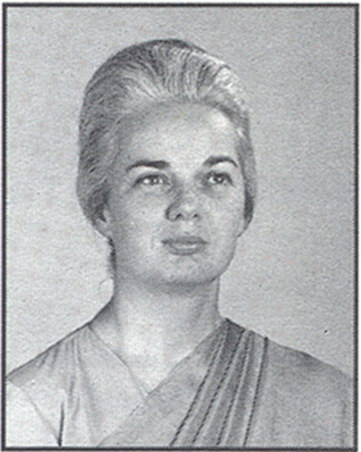 Sri Mrinalini Mata was born in 1931 in Wichita, Kansas. Known in her pre-monastic life as Merna Brown, she spent a good portion of her youth in southern California. Described by others as a deeply religious and shy child, the young Merna first met Paramahansaji at the San Diego Temple of SRF, when she was fourteen years old. Her mother had begun attending Paramahansaji’s services at the San Diego Temple after her older daughter became interested in the Guru’s teachings, and had several personal interviews with the Guru. Paramahansaji took a deep interest in the future Mrinalini Mata even before meeting her, and encouraged her mother to bring her to the temple. After several entreaties, she was able to convince Mrinalini Mata to accompany her to one of the Sunday services. Out of a sense of loyalty to the church in which she had been raised, Mrinalini Mata had been reluctant to attend a services of another religion, but she eventually agreed to visit the SRF Temple after her mother explained that Paramahansaji’s teachings beautifully reflected the same philosophy as Christ taught.

With her Bible tucked under her arm, the determined young Merna entered the SRF San Diego chapel one December day in 1945. Upon seeing Paramahansa Yogananda for the first time, she later recounted, she was filled with “a tremendous feeling of peace” and a sense of “something anciently familiar.”

Paramahansaji immediately recognized her as one who would play a key role in his work in years to come. Years later, shortly before his passing, he said to her about that first encounter: “You know, when you walked into that temple in San Diego and I saw you for the first time in this life, I saw the whole history of the past when we had been together, and I saw the future.… It hasn’t been one bit different than what I saw that day.”

Soon after meeting Paramahansaji, the young Merna felt the call to devote her life to God and Guru as a renunciant in the SRF monastic community. The Guru requested that she first complete her junior high school education. Then, with her parents’ permission, on June 10, 1946, at the age of fifteen, she came to live at the SRF Hermitage in Encinitas, California. In Encinitas she finished high school while receiving Paramahansaji’s personal guidance and ashram training. The Guru’s advanced disciple Sri Gyanamata, who was in charge of the Hermitage, was a beloved and influential mentor and spiritual mother to her during those years. (Mrinalini Mata’s own mother entered the ashram two years later, receiving the name Meera Mata after taking her final sannyas vows.)

Keenly aware of the exceptional spiritual maturity of this young disciple from past incarnations, Paramahansaji personally bestowed on her the final vows of sannyas in 1947, after she had been in the ashram only about a year. He chose for her the monastic name “Mrinalini,” signifying the purity of the lotus flower, an ancient symbol of spiritual unfoldment. 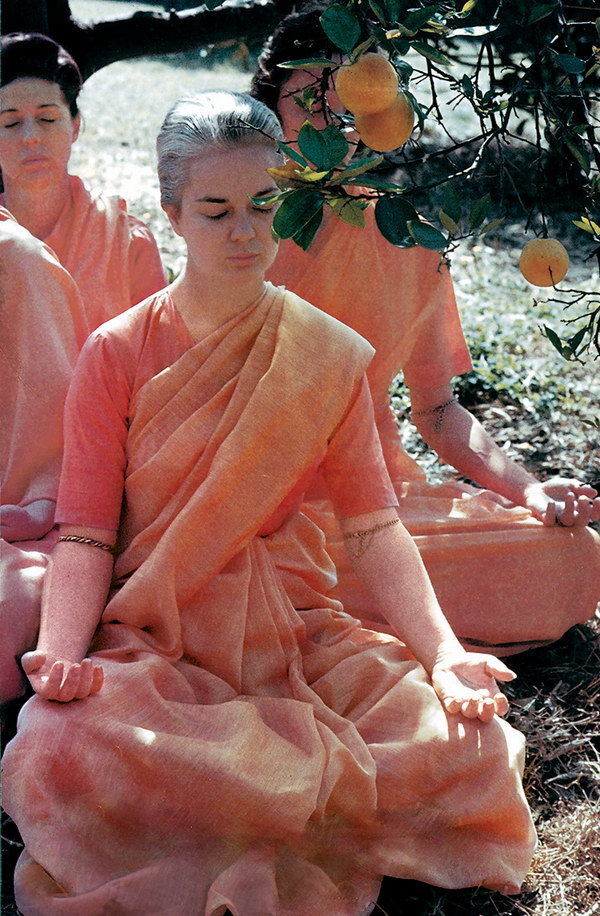 As a young disciple in the SRF ashram

Her Role In Publishing the Guru’s Teachings 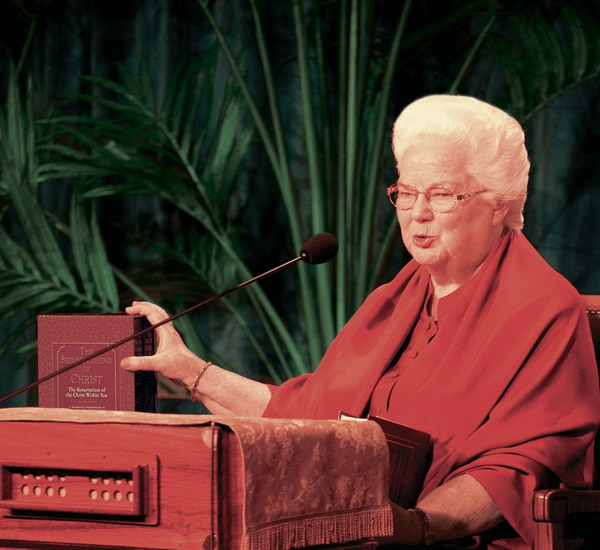 Release of The Second Coming of Christ, Paramahansa Yogananda’s commentaries on the Four Gospels, during the SRF World Convocation in Los Angeles in 2004

From the very beginning of Mrinalini Mata’s life in the ashram, he spoke to the other disciples about the role he envisioned for her—especially her future responsibility as editor of his Yogoda Satsanga/Self-Realization Fellowship Lessons, writings, and talks. “She was destined for this work,” he said in a handwritten letter to Rajarsi Janakananda in 1950. “God showed it to me when I first saw her spirit.”

Sri Daya Mata wrote, “Gurudeva made clear to all of us the role for which he was preparing [Mrinalini Ma], giving her personal instruction in every aspect of his teachings, and in his wishes for the preparation and presentation of his writings and talks.”

Through daily association during the years that followed, until the last years of his life, Paramahansaji devoted close attention to the spiritual training of Mrinalini Mata, providing her with personal instruction on how to edit his manuscripts and talks for publication after his passing.

Many works of Paramahansa Yogananda have been published under her direction, as well as being translated into other languages, including his critically acclaimed translation and commentary on the Bhagavad Gita, God Talks With Arjuna; his masterful commentaries on the Gospels, The Second Coming of Christ: The Resurrection of the Christ Within You; several volumes of his poetry and inspirational writings; and more than 150 of his talks in three anthologies of his Collected Talks and Essays. We look forward to announcing in the near future other major publications that she finished her work on shortly before her passing.

Over the years, Sri Mrinalini Mata made six visits to India to assist Sri Daya Mata in guiding the growth and work of Paramahansa Yogananda’s Yogoda Satsanga Society. She spent much time in the YSS ashrams and lectured on his teachings in principal cities of the subcontinent. Her talks on a variety of subjects, including on the guru-disciple relationship, have been published in Yogoda Satsanga magazine, in book form, and in audio and video recordings.

Mrinalini Mataji’s periodic letters of counsel and inspiration to the membership, along with her unique combination of profound wisdom, compassion, and humor, have earned her the loving reverence and profound gratitude of YSS/SRF members throughout the world. 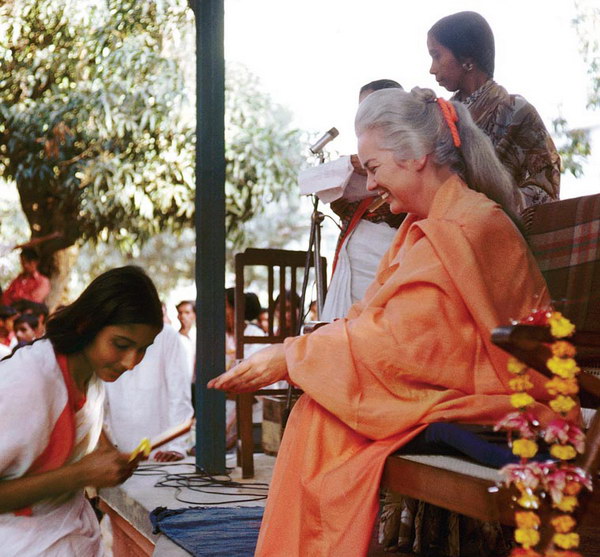 The Lasting Inspiration of Her Life’s Legacy

YSS/SRF members and the world at large will be forever blessed by the priceless legacy of God-inspired wisdom and truth—the teachings of Paramahansa Yogananda—that have been brought into publication through Mrinalini Mata’s many decades of selfless and divinely attuned service. As the years go by, the enormous contribution she has made by carrying out the Guru’s wishes in this way will be an enduring monument to her life of inner and outer divine achievement.

Always anchored in the consciousness of God, Sri Mrinalini Mata offered this advice to devotees:

“Any person who has truly experienced even a brief glimpse of God can never again be the same—can never again be satisfied with limited worldly consciousness as before. You do not cease to enjoy the world or its wholesome pleasures; there is just a turning of the awareness from the outer side to the inner side of reality. Instead of being identified with physical forms and limitations, attachments and desires, likes and dislikes, joys and sorrows, you see all of life as an expression of God. You perceive everything as made out of His infinite light and consciousness. You enjoy the love and companionship of your family because you feel flowing through you His love, which He has given you to love that family. In the love you in turn receive from them, you feel not just a selfish, physical, limited human emotion but that infinite love of the Divine. When you look at a rose, or the myriad beautiful things that God has created, you see behind the beauty of the petals the infinite light and consciousness of the Creator who has made and who sustains that beauty.

“No matter what experiences you go through externally, or what lessons you are learning through those experiences, let the consciousness always be centered on that one Reality—the one thing that will never fail you, that will never change, that is eternal—God, and your relationship with Him.” 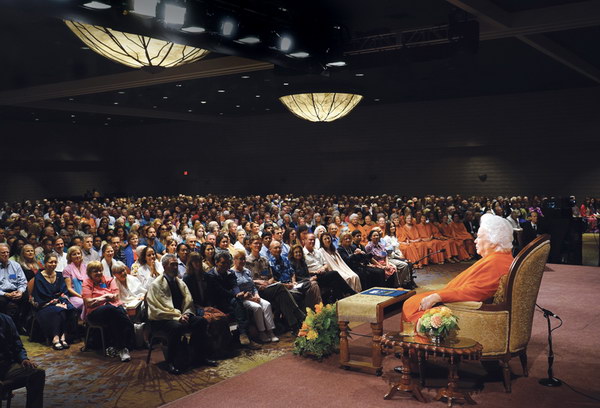 May we continue to feel her loving presence and be guided by her counsel to always strive to anchor our consciousness on “that one Reality that is eternal—God.”

Please join us as we come together to send our hearts’ love and gratitude to our beloved Sri Mrinalini Mata. May her life of selfless service, friendship, and loyalty inspire you “to allow God and Guru,” as she counseled, “to mold your life to express fully the divine image within you.”

Acknowledgement: This is an article taken from YSS website at this link